Noelle has been reading Regicide by David Boyle 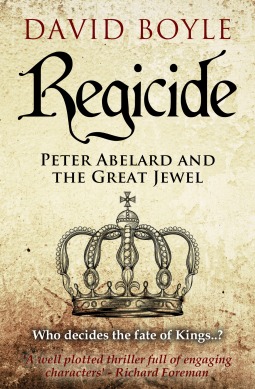 Regicide begins with a description of a historical event: King William of England, known as William Rufus (1087-1100) died after being struck by an arrow while he was hunting in Normandy, shot by a person unknown. His younger brother Henry succeeded him with such great haste that murder was suspected, but never proven.

The real story commences in 1119, when Hilary (a person who did exist), a traveling teacher, sometime poet and clerk in Holy Orders, is let go from his position as a tutor to the daughter of the Lord of Beaugency, after she dies of St. Anthony’s fire (ergot poisoning, common in France and Germany at the time). Taken by cart with his books and papers to the Loire River, from where he could go by boat to Orleans in search of a new position, he spends the night at a riverside inn. There he meets John of Muchelney who buys the impoverished young man his dinner and afterwards plays dice with him. When Hilary loses, his debt is discharged by his obligation to take a bulky pouch to Count Fulk of Anjou. The next morning, Hilary finds John horribly murdered and fearing himself in danger, eschews the boat and quickly begins the many days’ walk to Orleans and then Chartres. Still feeling himself followed, he goes on to Paris to consult with his old tutor and Master, Peter Abelard, in the hopes of some direction as to what to do.

When he and Abelard read the contents of the pouch entrusted to Hilary, they realize that it is part of a conspiracy to overthrow King Henry, a message about who benefitted from the death of William Rufus, and about the Great Jewel of Alfred the Great, which had been missing since 1066. Despite the fact the contents puts Hilary in the crosshairs of both sides of the debate, he nevertheless feels his vow to deliver its contents is unbreakable and Abelard decides to help Hilary fulfill his promise.

The author weaves many historical characters in and out of this story – Heloise, Fulk of Anjou, Walter Tirel, Hugues de Payen – as our pair travels as far as Jerusalem in search of Fulk, then returns with the rejected pouch contents to present to King Henry as a sign of goodwill. Death follows them, and the reader is treated to the Tower of London, along with a mass of other historical details.

The story reminded me no small amount of the adventures of Don Quixote and Sancho Panza. Peter Abelard is the philosopher, deep thinker, orator and teacher, while Hilary, his student, is the grounding and querying sidekick.

I loved the history around which this novel is woven – that of the Anglo-Saxons – and I found the detail captivating. However, because of this detail, the book must be read slowly to absorb everything and I found myself doing some online searching of the history. It also varies from slow and ponderous exposition to scenes filled with action and tension. Luckily there was enough of the latter to keep me going!

If you like historical fiction and an alternative and intriguing story of an ages-old mystery, and you don’t mind the occasional slow pace, then Regicide is a book for you.

This review is offered as a member of Rosie’s Book Review Team. I purchased this book for review.

England, 1100. King William Rufus is killed with an arrow on a hunt. Rumours start immediately that he was murdered. Nineteen years later in France, Hilary the Englishman is dismissed from his position as tutor when his student, Alys, a young girl with whom he has fallen in love, dies of fever.
Turned out in the street Hilary meets a strange man offers to buy Hilary a meal if he does him a favour. He gives Hilary a pouch of silver, and a message to be delivered to Count Fulk in Anjou. But by morning the man is dead, and the crows feasting on his body. Fearing he will be accused of murder, Hilary flees. But he owes a debt of honour to deliver the message. Hilary knows only one man can help him. His former teacher, the brilliant Peter Abelard.
Much has happened to Abelard in the years since Hilary knew him. Although he may not be the man he was, he comes to the aid of his former student, deciphering the message….A message about the death of King William Rufus all those years before. A message about who benefited from that death and about the Great Jewel of Alfred the Great… a jewel which rested in the crown used at the coronation of kings, but has been missing since 1066. Hilary and Abelard’s journey will take them through France, England, and Jerusalem as they race against time to save their own lives, and the fate of the monarchy. For there is a mysterious Saxon claimant to the throne. 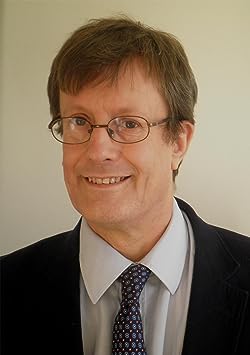 David Courtney Boyle, 1958-, is a British author and journalist who writes mainly about history and new ideas in economics, money, business and culture. He lives in the South Downs. His most recent public role was conducting an independent review for the Treasury and the Cabinet Office on Barriers to Public Service Choice, which reported early in 2013.

His book Authenticity put the phenomenon on the business and political agenda. His previous books The Tyranny of Numbers and The Sum of Our Discontent predicted and fermented the backlash against target culture. Funny Money helped launched the time banks movement in the UK.

More recently, he has been writing about why organisations and public services are so ineffective, working with the New Economics Foundation and NESTA on a series of publications about coproduction, and publishing his own solutions as The Human Element. This argues that organisations have abandoned human skills in favour of numerical targets or IT systems, which frustrate the business of building relationships and making things happen.

His history books usually have a business or economic dimension, including Blondel’s Song (UK) and The Troubadour’s Song (USA) about the imprisonment and ransom of Richard the Lionheart. His 2008 book Toward the Setting Sun tells the intertwined story of Christopher Columbus, John Cabot and Amerigo Vespucci and their race for America in the 1490s. His 2010 book, Eminent Corporations with (Andrew Simms) has introduced a new genre, the mini-corporate biography, launching the idea of corporate history as tragedy. His recent book Broke has launched a public debate about the plight of the middle classes.

He has been the editor of several journals including New Economics and Town & Country Planning. He is a fellow of the New Economics Foundation and has been at the heart of the effort to develop co-production and introduce time banks to Britain as a critical element of public service reform. He has been closely involved in their Clone Town Britain campaign and writes about the future of volunteering, cities and business. He edited the Foundation’s publications New Economics, News from the New Economy, and then Radical Economics from 1987-2010.

David helped found the London Time Bank, and was co-founder of Time Banking UK. He has been a candidate for Parliament of the United Kingdom. He was editor of the weekly Liberal Democrat News from 1992-1998.

His bestselling books for Kindle have mainly been about history, including Alan Turing: Unlocking the Enigma, Peace on Earth and Unheard, Unseen.

A really detailed tale about events surrounding 1066, the Battle of Hastings and the years that followed. Very interesting account of the first Holy Crusade and a delightful band of Brethren who surround Edgar, the rightful heir to the English throne.

At the moment I’m reading a thrilling tale of adventure surrounding 1066, the Battle of Hastings and all that follows. The story revolves around Edgar, the child who was true heir to the English Throne when William the Conqueror brought his Normans to England. He collects an unusual band of warriors and they travel together to Sicily and later as part of the Holy Crusades. There is a lot of history and historical characters to read through, but the detail is fascinating. If you like historical novels or want to know more about the Normans or the crusades, then this would be a great read.