Noelle has been reading Sentinel by Carl Rackman 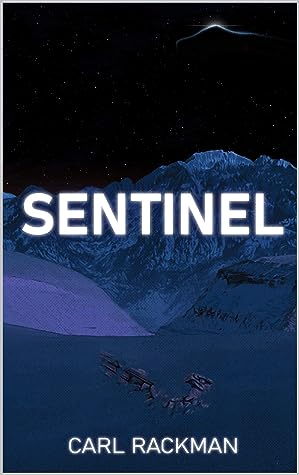 I will confess I am a fan of Carl Rackman’s books but somehow missed the first book in this series, Voyager.  Nevertheless, I plowed ahead and discovered that the author covered enough of the high points from Voyager that I could hit the ground running. I was not disappointed.

Four years have passed since Voyager One sent back chilling photos of a spaceship from deep in interstellar space. However, with terrorism, pandemics and political turmoil consuming the news, the story faded to the back page and the public has accepted it as a hoax. All but the Triumvirate, a global and powerful conspiracy that has inserted itself into the highest levels of various governments. They have created a wall of subterfuge so they themselves can welcome the Visitors, the occupants of the spaceship, who are coming with sinister plans.

Countering the Triumvirate are the strong characters typical of Rackman’s writing: Matt Ramprakash, former airline pilot and now an officer of the British intelligence agency MI5; his wife, Callie Woolf, who once headed the Voyager One mission and who believes that the spaceship is not a hoax; former FBI agent Brad Barnes who now leads Sentinel, a private intelligence and counter-terrorism operation founded to counter the Triumvirate; and Alex Ephraim, a superhuman soldier, thought to be genetically engineered, and a former Triumvirate assassin who has switched sides to join Sentinel.

The story opens a little slowly, which is where I think it could have been improved, but then starts to pick up speed until by the end, the reader is reading and flipping pages as fast as possible. The action scenes are meticulously plotted and easy to visualize and employ incredible technology. From a diversionary airplane hijacking to action on the icy cold and barren reaches of Antarctica, this suspense thriller pulls you in and then delivers a solid punch with a science fiction twist, leading directly to a third book in this series. Which I await.

This is a cracking good read.

Four years have passed since Voyager One sent back chilling photos of a spaceship from deep in interstellar space.

A shocked world prepared to meet the Visitors, but terrorism, pandemics, and global political turmoil have now consumed it. Discredited as a hoax, the Visitors have faded from public attention.

But the powerful global conspiracy known as the Triumvirate is behind much of the chaos. Creating a screen of subterfuge and misdirection, they prepare a clandestine welcome for the Visitors, whose origins may be more sinister than the aliens of popular fiction.

Standing in their way are the few brave men and women who foiled the Triumvirate’s last attempt to upset the world’s fragile balance of power:

Matt Ramprakash, former airline pilot and now an officer of the British intelligence agency MI5, is embroiled in a deadly standoff when an airliner is hijacked.

Callie Woolf, once the project manager of the Voyager mission, struggles against the sceptical government’s bureaucracy to continue the search for the elusive Visitors as her time and funding runs out.

Sentinel is the only organisation capable of taking the fight to the Triumvirate’s door – flexible, unorthodox well-funded and free of government red tape.

But as they pursue the Triumvirate from the streets of London to the wild, deadly wastes of Antarctica, Brad will need Matt and Callie’s help to stop the Triumvirate, which has its own plans for putting Sentinel – and especially Alex – out of the picture for good…