Terry has been reading Apparent Horizon by Patrick Morgan 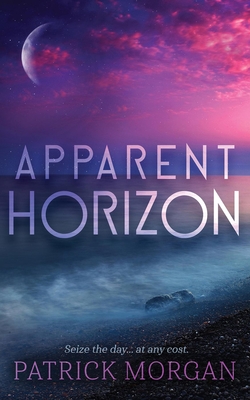 4*
This was a terrific story, a most original idea that would make a marvellous film or miniseries. Three friends, Michael, Drew and Aaron, get together on the eve of Drew’s wedding. Aaron, who works on top secret projects at NASA, tells the other two about a gamma ray burst that will hit the southern hemisphere the next day. He warns that it will quickly destroy the food chain, cause massive radiation and thus end human life on earth, sooner rather than later. Basically, the world is about to end.
During Drew’s wedding the sky does indeed light up at exactly the time Aaron predicted, but the news media dismisses it as a harmless event, as he warned would happen.
The story is written in the third person POV of Michael, and details his reactions to this news, and the effect it has on him. Having always been an introverted sort of guy who lived a ‘safe’ life, he wonders if, now that there is so little time left, he can let loose a part of himself that he is not even sure exists.
The characters are all clearly defined, and the dialogue is great—you know it’s good when you don’t feel as though you’re ‘reading dialogue’, as I didn’t, in this. The plot itself is extremely well thought out, with plenty of surprises, though a few warning bells did ring for me early on. On the whole I enjoyed reading it, though I found it somewhat lacking in suspense; there was too much ‘Michael did this, then Michael did that’. I thought some of the detail could have been edited out; a loss of around twenty-per cent could have made it sharper, fast-paced, more of a page-turner.  t just needed a bit more pizazz, to do justice to the excellent plot. I also expected a final twist that never came; okay, I’d actually decided what it would be, but this is Patrick Morgan’s book, not mine!
This is a commendable first novel, and I’m sure that the author will develop his style as he continues to write. Nice one.

With no tomorrow, what are we capable of today?

On the eve of his best friend’s wedding, Michael is warned by an old classmate, now a NASA scientist, that a gamma ray burst from a nearby exploding star will hit the Earth the following morning at 11:13 a.m. – an incident that will irrevocably destroy the ozone layer, disrupt the food chain, and ultimately prove cataclysmic for all life on the planet.

Michael and the groom-to-be, Drew, laugh off the prediction as a demented joke. However, at precisely 11:13 a.m. the next day, a blinding light in the sky disrupts Drew’s wedding. News media outlets dismiss the cosmic event as a harmless phenomenon, but Michael knows better. Wrestling with the burden of his truth, uncertain of how much time he has left or just what to do with it, Michael finds himself alienated from everything and everyone he’s ever known.

Under Drew’s influence, Michael begins to transform his rather mundane life, previously shackled by powerlessness and fear, into something more unrestrained and ultimately dangerous. Feeling the weight of an unseen doomsday clock ticking his final days away, he pushes the moral envelope further and further on a quest for control over his own reality – no matter who might suffer for it.