Hiss is a young adult fantasy story and book one of The Unmagic trilogy. In Arilloa the royal family have magical abilities, which they use to gain respect from the non-magical people. The youngest royal child, Isidor, nicknamed Hiss, has exceptional powers and can create colourful monsters, but few people love or understand him, including most of his family. His teenage sister Leonie is the only one who has the patience to be his friend and companion. But it is not enough and Hiss runs away. He can’t be found, but his monsters start attacking the kingdom and rumours begin of a rebellion.

As the war rages on, it becomes obvious that Hiss, although just a young child, is behind the attacks. Believing that he has been captured and is being forced to send his monsters, Leonie offers to go and rescue him from the enemy. She takes with her just one palace guard, a knifecloak called Armand, and together they set off on a quest to save the kingdom.

I liked the idea of Hiss and his magical monsters they were very colourful and easy to imagine. There is a romance which crosses back and forth between younger teenage and older young adult levels of intimacy which, for me, was a weaker area to this story and might have worked better with lots more tension and promise of more in the next book in the series.

Leonie was a teenager who struggled with maturity and insecurity. She was often a brave adventurer, but her actions in the romantic theme let her down. I thought that there was more room for stronger character development especially after her return to the palace.

Overall I like the magical creatures and their connection to Hiss, but the romantic sub-theme didn’t quite work for me.

In Arilloa, the royal family uses their magic to win the respect of the ordinary populace. But Leonie, a princess and second in line to the throne, has a terrible secret: she’s barely magic at all. The only person to ever find out her secret is Armand, a boy training to become a Knifecloak, one of the elite castle guards.

Leonie’s younger brother Hiss, on the other hand, is a child prodigy with greater powers than anyone else in the family, capable of creating monsters out of thin air. One day Hiss goes missing and resurfaces at the head of a rebellion, using his powers to strike against the country and the crown. Monsters against soldiers, magic against normality. Leonie and Armand must find Hiss and stop him while the monster-driven war rages around them.

A Young Adult (YA) / New Adult (NA) novel with elements of both fantasy and romance. 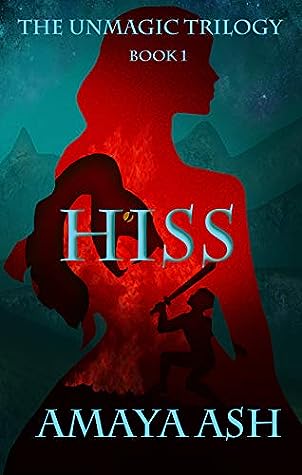