The Shadow Man by Helen Fields

The Shadow Man is a thriller set in Edinburgh. We are introduced to Dr Connie Woodwine, an American forensic psychologist and crime profiler. She’s been asked to work with DI Brodie Baarda on a kidnapping case. Connie is also interested in a recent murder case, and she adds her own unusual investigation methods into the mix.

When more kidnappings occur, the pressure to solve the case shifts gears; Connie offers a theory which seems bizarre, and which she just has to prove before time runs out for the victims.

I liked Connie, with her flaws and her brazen personality; she acted unexpectedly and it worked well with the story. The narrative goes back and forth between the police investigation and the kidnapped characters.  Some of these parts were particularly brutal, but no more so than what has come to be expected in this genre of fiction. The story moves at a good pace, and the build up to the ending had a twist which I hadn’t seen coming.

This is the second book I’ve read by this author, and I am still able to say that I can happily recommend her to readers of police crime fiction, or those who like books set in Edinburgh and who don’t mind a bit of  gruesome content.

He collects his victims. But he doesn’t keep them safe.

Elspeth, Meggy and Xavier are locked in a flat. They don’t know where they are, and they don’t know why they’re there. They only know that the shadow man has taken them, and he won’t let them go.

Desperate to escape, the three of them must find a way out of their living hell, even if it means uncovering a very dark truth.

Because the shadow man isn’t a nightmare. He’s all too real.

Due out 4th February 2021 AmazonUK | AmazonUS 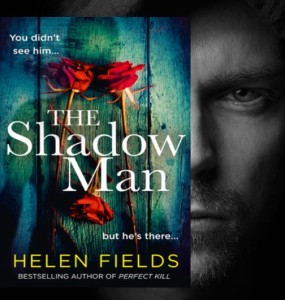