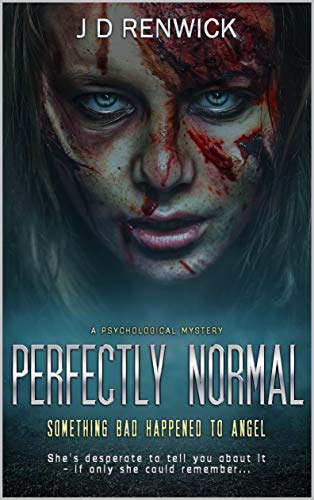 Perfectly Normal is a mild thriller and explores the harrowing subject of what happens to a child offender in the UK who is below the age of criminal responsibility.

At the age of almost seven, Angel lives a normal life with her family, until an incident occurs that remains unexplained to the reader. A year later, we see her wake up in a room which she calls a cabin. As the story evolves, it becomes clear that Angel is in a secure children’s care home.

Now an older teenager, Angel writes a diary about her childhood years.  However, she is frustrated that she doesn’t know what happened in the missing year; we learn about her life in snippets, dotting back and forth between past and present. The care facility gives Angel opportunities for education, and she has access to the internet so that she can learn about the outside world. When she turns eighteen, she is released into sheltered accommodation – the good news is that she can now apply for access to the police reports surrounding the incident which changed her life forever. She hopes that reading them will help her remember what happened and allow her to move forward.

I would describe this as a medium-paced story; I thought that events might have taken a creepy, sinister turn, especially with the suggestion of the supernatural. However, it did not develop in a way suggested by the tension of the earlier part.  I felt that opportunities to make this an intriguing page-turner were missed; had the story been written from the POV of Angel as an unreliable narrator, I think it would have worked much better.  Instead, the author focuses on the regulations surrounding underage offenders.  As for the ending, I found it too inconclusive, and rather disappointing.  Of course this sort of thing is always subjective, and it may work for other readers.

On a side note, the author provides an in-depth addendum at the back for readers who might have further interest in the child offender regulations.

Angel’s a perfectly normal young adult – except she’s spent the last eleven years in secure accommodation, locked up under the Children Act because it appeared she was ‘likely to injure’ herself or others. It was not a miscarriage of justice; there was no justice at all. There was no trial, no barrister to argue her case, no jury to decide on her guilt. And she has no memory of what she allegedly did, high up on a dark and windy headland in East Sussex, back in 2007. She’s determined to discover what happened and why, and where her true destiny lies.