Terry has been reading Knight In Paper Armor by Nicholas Conley 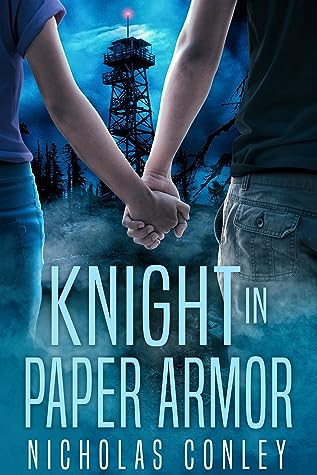 Billy Jakobek was born with powerful psychic abilities and has lived most of his life in a town called Heaven’s Hole, under the care of the Thorne Corporation that dominates America.  Billy absorbs the physical pain, trauma and memories of everyone he meets, which, most of the time, causes him fear and sadness.  He is frequently visited by an entity called The Shape, which he perceives as being the darkness in man, and which predicts a calamitous future for mankind.

At school, Billy meets Natalia, with whom he feels an immediate, powerful connection—it is more than just attraction.  Elsewhere, we learn more about Billy’s ‘Mother’, aka scientist Roseanne, and Caleb Thorne himself.  I liked that the author wrote chapters from Roseanne and Caleb’s point of view, too, as it shows us what is really going on behind the scenes—and what Caleb’s plans are once he has harnessed Billy’s powers.

I liked the feeling of depressed doom about the town of Heaven’s Hole, in which immigrant workers live and work in appalling conditions, though I would have liked to know more about it, and also how the country came to be how it is now—more background would have been welcome.

The characterisation is good; I had a clear picture of who each of the main players were, and the dialogue is strong and realistic, the emotions portrayed well.  What I was not so keen on was the frequency of inner thoughts in italics (on just about every page), and the fact that the book was more YA-orientated than I thought it would be; I would class it as a YA book even though it is not listed as such.  One can have enough ‘teen speak’.

I thought this book would be very much my cup of tea, though it wasn’t so, but it’s good of its type, and it is clear that a lot of work and thought has gone into it; and the aspects I was not so keen on are down to personal taste rather than there being anything wrong with the book.  I’ve given it 3.5* for how much I enjoyed it, though it’s worthy of 4* for readers who enjoy teen-supernatural books with powerful themes of good and evil, and the overcoming of light over dark.

Billy Jakobek has always been different. Born with strange and powerful psychic abilities, he has grown up in the laboratories of Thorne Century, a ruthless megacorporation that economically, socially, and politically dominates American society. Every day, Billy absorbs the emotional energies, dreams, and traumas of everyone he meets—from his grandmother’s memories of the Holocaust, to the terror his sheer existence inflicts upon his captors—and he yearns to break free, so he can use his powers to help others.

Natalia Gonzalez, a rebellious artist and daughter of Guatemalan immigrants, lives in Heaven’s Hole, an industrial town built inside a meteor crater, where the poverty-stricken population struggles to survive the nightmarish working conditions of the local Thorne Century factory. Natalia takes care of her ailing mother, her grandmother, and her two younger brothers, and while she dreams of escape, she knows she cannot leave her family behind.

When Billy is transferred to Heaven’s Hole, his chance encounter with Natalia sends shockwaves rippling across the blighted landscape. The two outsiders are pitted against the all-powerful monopoly, while Billy experiences visions of an otherworldly figure known as the Shape, which prophesizes an apocalyptic future that could decimate the world they know.