Liz has been reading Face The Wind by Caren Werlinger 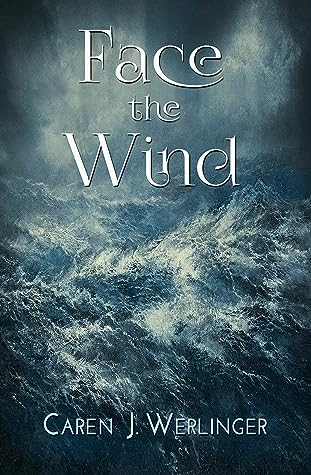 On the small island of Little Sister off the Atlantic coast of Maine, Kathleen is beginning to feel settled in her relationship with part-time Sheriff, Molly, and is now an important member of the close-knit community. But another young woman is on her way to the island from the other side of the States. Teacher, Meredith Turner finds her dreams filled with a dramatic shipwreck and identifying the ship from a picture she believes it happened near to Little Sister. Her mother shares the same dream and a surprise Ancestry DNA result causes the two women to question the past.

Louisa is the much-loved, retired island schoolteacher. She is lonely but has many friends to help her. As she waits out her days, she thinks back to her youth at college wondering if her life could have been different.  Molly is very happy with Kathleen but sometimes there are misunderstandings. She would love her brother, Aidan, to find happiness but he is scared of committing himself to another person.

The island’s population receive a portent, but will it be a disaster or merely a change in their customs? This magical place attracts many tourists but the last thing they want is an influx of newcomers. It is a pleasure to share the dramatic events and consequences, in my return visit to the island and to see characters I care about struggling to achieve their dreams. Another delightful story by Caren Werlinger.

Kathleen Halloran has never been happier. She and Molly Cooper have built a life together, living in her grandmother’s cottage. The family drama of the past has calmed down. She and Molly will soon be aunts. Life on Little Sister Island is everything Kathleen could wish for… until the island begins to send ominous signals that change is in the wind.
Living beside a different ocean, Meredith Turner tries to make sense of her dreams—dreams of an island she’s never seen but can’t forget. After an ancestry test throws her family into chaos, the tempest that follows blows Meredith and her parents clear across the country, to the island of her dreams.
For Louisa Woodhouse, it feels the end is near. With no one to follow after her, she’s the last of her line on Little Sister, and her secrets will go with her. Soon, the Woodhouse name will join the others that now exist only in the island’s genealogy records.
But Little Sister Island has its own magic—rhythms and seasons and tides and currents that even the best-laid human plans can’t fight. And in that magic is a warning—a storm is coming.