The German Client: A Bacci Pagano Investigation by Bruno Morchio

The German Client is a story which flits from war time Italy to a modern day hospital corridor. Private investigator Bacci Pagano’s latest client offers a tantalising finder’s fee to unearth a lost sibling; however, he’s tempted to turn it down because the timing is off.
Reluctantly, he begins the search for his client’s step-brother. His investigations take him back to friends of his parents, the old guard, those who have kept secrets hidden for sixty years and fear opening old wounds left by WWII.

In 1944, the war rages on and life in Genoa, Italy, is bleak, with severe allied bombing from above, and danger on every street corner. Partisans are using women to smuggle messages, but the Germans have a spy, and one Italian woman is asked to place her country before herself and discover who that mole is.

I was attracted to this story because I enjoy resistance themed war stories. The parts of the book set during the war were my favourite. I found it harder to understand the modern story theme, which may be because this is book six in the series; earlier books will, no doubt, offer more clues to Bacci’s personal dilemmas. There are a lot of characters in the story and many have a second war time code name which sometimes made it hard to keep them all in my head. It did enjoy this and would read another by this author, especially if it also had a war-time theme.

Private investigator Bacci Pagano can’t resist taking the bait when his new client dangles a check with too many zeros. He should have known that where there’s bait, there’s always a hook.

In a hospital corridor, private investigator Bacci Pagano is keeping watch over Jasmìne Kilamba. If she lives, her testimony will shatter a  notorious human trafficking ring. Seemingly out of nowhere, he is approached by an elderly German named Kurt Hessen who is searching for his Italian half-brother. Despite his better judgment, Pagano accepts the job.  So many things, good and evil, happened when the Nazis occupied Genoa in 1944, what did it matter now? But it matters very much to someone and Pagano finds himself plunged into a world of old secrets and new lies in this wartime thriller where the bill for the sins of the past has come due . . . with interest.

Originally published in Italian as Rossoamaro, The German Client elegantly intertwines a wartime thriller about Nazi-occupied Genoa with the gritty realism of Pagano’s current investigation in what La Repubblica called “a masterful tale. 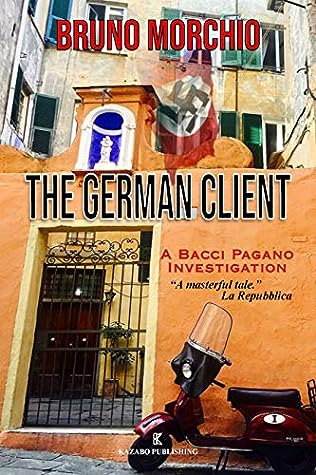