Cathy has been reading Listed Dead by Jan Edwards 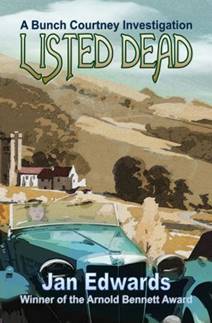 Listed Dead is the third in the Bunch Courtney series and told from her perspective in the third person. There’s much more insight into the Courtney sisters’ background, the environment in which they grew up and the family dynamics in this book. Things have changed drastically for Bunch since the start of the war. The family home, Perringham House, has been requisitioned by the military and Bunch is left to run the estate with the help of Land Girls, while living at the Dower House with her Granny Beatrice.

When a body is discovered in a fatal car wreck close to Perringham House Bunch goes to investigate, hoping it’s no-one from the estate. She knows there’s something suspicious about the accident when she finds Chief Inspector Wiiliam Wright at the scene. The victim is familiar to Bunch as a friend of her sister’s, one of a group of young pleasure seekers who got together several years ago to form a supper club. When a second member of the club is found dead, Bunch finds herself acting as a police consultant (once she and Wright overcame the issue of her title) finding out what she can about the victims and those members of the club who are still around.

I enjoyed the interaction between Bunch and Chief Inspector Wright and their joint investigation. They make a good team and there’s scope for more of a relationship. Bunch is familiar with the lifestyle of the privileged younger set, who want to live as they did before the war and which couldn’t be further from the lives of ordinary people and those serving in the military. Her knowledge of people and places help, but as she invites gossip from friends and contacts someone is not happy with her interference. There’s a darker undercurrent to this story than previously and the trail leads Bunch into life threatening situations.

The writing and characterisations are realistic and authentic for the time, as is the atmosphere which is re-enforced by a strong sense of place. Bombing raids, rationing, air raid shelters and blackouts are becoming part of everyday all across the country, although the cities are hit the hardest, most notably London. The descriptions of the air raids, the shelters and life generally was very evocative.

Bunch is an extremely likeable protagonist, resourceful, determined and quick to notice things. Not much would cause her to deviate once her mind was made up. A very enjoyable read.

November 1940. The Battle of Britain has only just ended and the horror of the Blitz is reaching its height.

Two deaths in rapid succession on the Sussex Downs brings Bunch Courtney and Chief Inspector Wright together once more. What could possibly link a fatal auto accident with the corpse in a derelict shepherd’s hut? The only clue the pair have is a handwritten list of the members of a supper club that meets at London’s Café de Paris.

Two of those on that list are now dead and the race is on to solve the mystery before any more end up on the mortuary slab.