Robbie has been reading The Vatican Games by Alejandra Guibert 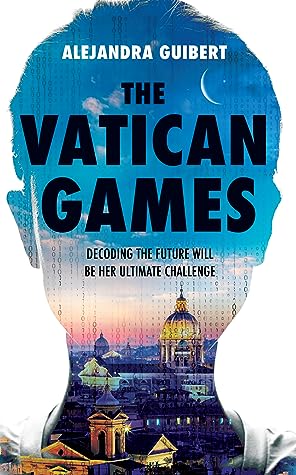 The Vatican Games is an unusual dystopian read. Dystopia is one of my favourite genres and I read a lot of it. Right up front I must say that I did not find this book an easy read. There is a lot of telling instead of showing and this, combined with a complicated story line, made it difficult to follow the story in some places. I found that this improved as the story progressed and I became more familiar with the premise and the characters. The writing was also a little unnatural and stilted for me.

This being said, I found this book to be a clever and entertaining story. Vera, the main character, is born into a new world where a huge apocalypse has occurred, resulting in the deaths of five billion people throughout the world. The nature of the catastrophe, a poisoning of water resources in primarily the USA which impacts on their exports of soft drinks, thereby impacting many other countries in the world, results in the USA becoming virtually uninhabitable. Immediately after this event, war breaks out in numerous third world countries resulting in further death and destruction.

The survivors find themselves in a new world which a better form of communism or possibly socialism is achieved. The remaining populations of the world are uplifted and educated so that they can take their places in the new world. The entire population of the world is run on an extreme capitalistic formula in that companies need to generate profits, but these profits are shared equally by all in the manner of a communist regime. The new world government steps in very quickly and seemingly seamlessly to achieve this new world status which does require some suspension of belief, especially if you look around the current capitalistic and communistic countries of the world.

All religion is dispensed with and people are entertained and educated using technology, and in particular computer games. The religious orders of the old world embrace the development of these computer games as their only means of survival and recruit intelligent and innovative people from within their organisations to develop new games on an on-going basis.

Vera, who has been brought up in a Catholic convent following the death of her mother, is chosen to enter the Vatican as a games developer. She quickly becomes embroiled in a plan by select members of the church to use their games for illicit purposes. Can she unravel the plot and prevent another catastrophe? You’ll have to read the book to find out.

I must also point out that there are some scenes involving suicide with might be disturbing or triggers for sensitive readers.

Vera is born on the day an apocalyptic revenge is unleashed, annihilating half of the world’s population.

Her birth marks the beginning of a new world order run by powerful gaming corporations.

A warless existence with no poverty has been secured, until this fine balance becomes once more under threat.

Vera is the female David to beat Goliath and prevent further devastation.

The future lies in her hands. It’s a game that she needs to win.