Olga has been reading Billy (The Kid) by Peter Meech 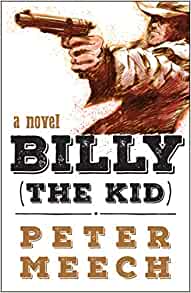 This is the first novel I read by the author (although I might have watched some of the productions based on his scripts), and I thoroughly enjoyed it. If Peter Meech carries on writing fiction, I intend to keep reading him.

The description below provides enough detail to allow possible readers to decide if they are interested or not. This novella is a Western, a late-day Western. We are at a point in history where there is little of the old West left, where there are cars, the cinematographer, inventions all around (this novella has some of the feel of steampunk, because there is a lot of attention paid to novelties and new technology, as it would have been the case, especially in a small town), and legends and myths about the good old times are rife, to the point where there are books, movies, and even auctions of items belonging to Western heroes, outlaws, and everything in between. This is emphasised by the story about two bootlegging operations that brings in an element of the gangster tradition as well (down to golden teeth, fancy cars, henchmen, offers one dare not refuse, and bloodbaths) and a reminder of the Prohibition and its business practices. At the heart of the book is the story of Billy the Kid, or at least, of a retired dentist who claims to be (or have been in a previous life) Billy the Kid. That means that much of the book revolves around: issues of identity, what makes us who we are (and what makes others accept or not who we are), growing old, popularity (particularly interesting in these times of social media and celebrities), living with a certain reputation, wanting to set the record straight, second chances (there is a budding romance as well), settling old debts, old and new friends, honour and morality. Times are a-changing and that is also evident in the book, which manages to conjure up a vivid and compelling image of that momentous time and place in the readers’ minds.

The story is narrated in the third person, most of the time from Billy’s (?) point of view, although at times there is an omniscient narrator that shares with readers an observer’s viewpoint, but whose style is very similar to that of Billy’s own reflections (and considering he is forever researching, compiling information, and taking notes to write his own story, a metafictional interpretation is also possible). Billy is an observer of people, places, the weather, and everything in between, and the author manages to combine language that feels historically appropriate, with a lyricism that makes for a beautiful reading experience. His experience writing, producing and directing scripts is quite evident, as the scenes are vividly rendered, not only visually, thanks to the detailed but not excessive descriptions, but also to the use of all the senses. We hear, smell, touch and even taste what happens. At times, we can see the main character zooming in on a sound, an image, or a little detail. And that is what makes it come alive. Oh, a word or pre-warning. Although I enjoyed the snippets of dialogue included (and some would not be out of place in the call-and-response tradition), I have to warn you that no dialogue quotations are used to mark the sentences spoken by the characters, although the dialogue tags used prevent any confusion.

There are numerous characters, although some don’t play big roles and are more a part of the background. Some are as expected in the genre (the corrupt sheriff, the waitress with a heart of gold, the baddy/gangster and his henchmen, Billy’s pals…) but some are better drawn (especially considering this is a short book), like Tommy, Billy’s young friend and protégé, and his love interest, Grace. Billy himself is an ambiguous but engaging character, and he has his (well-deserved) moment of glory towards the end of the book. If he is or not truly Billy the Kid… Let’s say you can read the book and reach your own conclusions.

Talking about the ending, I enjoyed it and felt it suited the genre well (yes, the protagonist rides into the horizon), but things are left open to interpretation. My favourite kind of ending.

So, I thoroughly enjoy this book, and I recommend it to fans of Westerns, particularly modern takes on the genre, those interested in historical fiction especially set on the West or the prohibition era, anybody interested in Billy the Kid, and readers looking for a short novel wonderfully written. This is a book to be savoured and enjoyed, rather than to be read at speed, but due to its length, it won’t last you long anyway. I recommend you to read the interview with the author and to try a sample if you have any doubts, and if not, don’t hesitate. I will make sure I follow the author’s trajectory from now on.

Pueblo, Colorado,1932. Bootleggers thrive in a town where the sheriff is on the take and you can kill a man with impunity. In this thrilling narrative, a once-famous outlaw finds himself thrust into the middle of a bootleg war against his will. At stake is nothing less than the life of his best friend and his last chance at true love with the town beauty. But is the legendary gunman who he claims to be, or is he just a retired dentist with a vivid imagination? In this remarkable first novel, Peter Meech reimagines the figure of Billy the Kid in a story told with verve and humor. Visually magnificent, and brimming with small-town charm, Billy (the Kid) builds to a climax that is as powerful as it is unexpected.