The Call of Magic by A.R.C.

The Call Of Magic is a fantasy adventure. Emma Lie has her life planned out; she has worked hard through her school years, and is now about to head to Harvard.

She has a part-time job in a small town restaurant, when two strangers appear in town, both looking for her. One is a young man who catches Emma’s eye romantically; until now she’s not allowed herself time to think about boys, but she allows herself to make friends with him.

Without giving too much of the plot away, Emma is offered an alternative place to study – a special school, where magic is taught.

The author then introduces us to an epic number of characters, taking time to describe each one, while the world-building is meticulous, again with lots of description. However, a downside to all this explanation is that it slows the plot.

At the beginning of the book I liked Emma and how dedicated she was to her planned future, but once she was taken away, her anger at everyone and everything began to be annoying. It is unlikely that a person could sustain anger for a long period; in real life a person’s emotions fluctuate constantly, and for Emma to remain an interesting character I would have liked to have seen a range of emotions throughout the story.

One of the hardest plots to write is one that has similarities to a book or series that is already well known. The author tried hard to make her story different from that famous school of magic, but mentioning the series more than once only made me compare them; it is not something I would advise, especially not for someone who is trying to make their own mark in the magic school theme.

Overall, the plot had good potential, but with some tighter editing it could have helped the main characters shine and the plot move at a more interesting pace.

Freshly graduated from high school, Emma Lie has never let go the betrayal her father served her. On the eve of her college departure, burdened with grand designs, Emma finds herself branded by a strange mark.

Bewildered by its appearance, Emma becomes distracted, then suspicious, of a captivating boy named Thies. Amid a passionate moment, she demands the truth from him. The cryptic answers Emma gets in return skew her reality forever.

Emma is thrust into the world of magic, stolen away from her home. Lofty intentions derailed, her mother in mortal danger, and forced into magical servitude, Emma must fight for survival and the life she had planned even as she battles for her own heart. 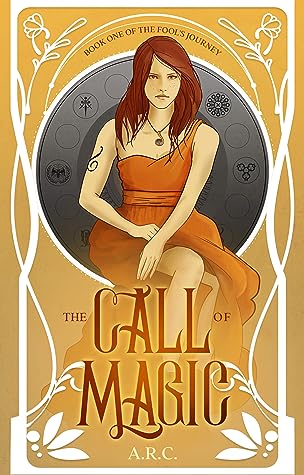 2 thoughts on “Rosie’s #BookReview Of #Ya #Fantasy Adventure THE CALL OF MAGIC by A.R.C”