Olga has been reading Matt: More Than Words by Hans M. Hirschi 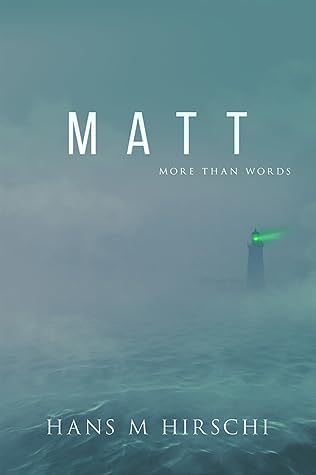 I have read quite a few of Hirschi’s novels and have enjoyed them all, and some are among my favourites in recent years. He combines some of the characteristics that I most admire in authors: he writes strong and diverse characters, no matter what particular challenges they might be faced with; he carefully researches the topics he touches on (even when some of them might seem only incidental to the novel, he makes sure nothing is left to chance) and uses his research wisely (never banging readers on the head with it); and he does not shy away from the ugliest and harshest realities of life, while at the same time always dealing sensitively and constructively with those. His stories are not fairy tales, and they force us to look at aspects of society and of ourselves that perhaps we’re not proud about, but if we rise to the challenge we’ll be rewarded with an enlightening experience. And a great read.

This novel is no exception. We follow the life of Matt, a young man diagnosed with cerebral palsy due to birth complications, for a few rather momentous months. The book, narrated in third person, is told from three of the main characters’ perspectives. The novel is mostly Matt’s, or at least as good an approximation at what Matt’s experience might be as the author can achieve. It is a difficult task, and he expresses it better than I can in his acknowledgements at the end (‘How does one write about someone in whose situation you’ve never been? How do you give voice to someone who has none? And maybe, most importantly, how, without being insensitive, without objectifying, generalizing, stereotyping, in short without being a “dick”, do you tell a story that needs telling, about someone who could actually be out there, right now?’).  He also explains that he shared his early drafts with experts (people with cerebral palsy and their carers), and, in my non-expert opinion, he manages to depict what the daily life of the protagonist would be like. The other two main characters, Timmy, a professional carer who is Matt’s personal assistant at the beginning of the story but gets removed from his team due to a misunderstanding, and Martha, Matt’s mother, are also given a saying and some of the chapters are told from their perspective. Timmy is a lovely young man, a carer in the true sense of the word, and he has a real calling for the type of job he is doing. Martha is a devoted mother who found herself in a tough situation when she was very young and who has poured her heart and soul into looking after her son. Neither one of them are perfect (nor is Matt for that matter), and they make mistakes, lose heart and faith at times, and can feel overwhelmed or despondent, but they never give up and always have Matt’s best interests in mind.

Of course, I’ve already said that this is not a fairy tale. Far from it. We all know and have heard about some of the terrible things that happen: abuse, neglect, lack of resources, and although in this case there is no political and/or social oversight (Matt has access to a package of care and the family is reasonably well supported, something that unfortunately is not the case everywhere), somehow things still go wrong, and we get to see what it must be like to be the victim of such abuse when you are totally unable not only of physically defending yourself, but also of even talking about it. Terrifying. Not everybody is suited for this kind of work, and it is sad to think that those in the most vulnerable circumstances can be exposed to such abuse. And yes, because of the level of need and the limited resources, sometimes the vetting procedures are not as stringent as they should be. (The current health crisis has highlighted how much we expect of some workers and how little a compensation they receive for their efforts).

Communication and how important it is to try and make sure everybody can communicate and become as independent as possible is one of the main themes of the book. The experience of living locked up inside your own body, with other people not even aware that you know what is going on around you and always making decisions for you comes through very strongly in the book. Matt knows and worries about how he is perceived by others, has internalised many of the attitudes he’s seen and the comments he’s overheard, and many aspect of life we take for granted are like an impossible dream to him. Speaking, going for a walk, even deciding what to watch on television, are tasks beyond his scope. The research into ways to facilitate communication and to increase independence is highlighted in the novel, and the role new technologies (including AI) can play is explored. With appropriate investment, there’s little doubt that this could make a big difference to the lives of many people.

Martha’s difficult situation (she wishes her son to fulfil his potential and be able to do what any other 23 year old normally does, but she’s also fiercely protective of him and does not want to get her hopes up for them to only be crushed again), the personal price she has to pay, the way she has to sacrifice any semblance of a normal life to keep looking after Matt, her worry about the future… are also convincingly depicted. And Timmy’s own feelings and his acknowledgment of his own limitations ring true as well. Family relationships feature strongly not only in the case of Matt, but also of Timmy, originally from Africa and adopted by Caucasian parents, a loving couple who accept him as he is, and Chen, Timmy’s friend and ex-boyfriend, whose parents are more understanding than he thought they’d be.

The writing style is compelling and descriptive, although the descriptions are focused on the emotions and feelings rather than on the outward appearance of people and things. I found the story moving, and although it is not a page turner in the common sense of the word, I was totally engulfed in it and couldn’t put it down, even when some of the events were horrifying at times and made me want to look away.

The novel ends in a positive note, and I hope that in real life everybody in Matt’s situation will have access to a fulfilling life, if not now, in the very near future. As a society we can do much to help, and we should.

This novel reminded me of Johnny Got His Gun by Dalton Trumbo (yes, the famous screenwriter who ended up in the blacklist, one of Hollywood’s Ten), whose movie version I saw as a teenager (also directed by Trumbo), and I’ve never forgotten. The main character there is a WWI soldier who is so severely injured during the war that he ends up unable to move and to communicate, or so those around him think. Although the circumstances are very different (the main character there had led a normal life before and has many memories, although if that makes his life better is a matter of opinion), and I’m sure this novel will appeal to people looking for a book focusing on diverse characters and exploring the world beyond our everyday experiences. As I’ve explained, it is not a comfortable and easy read, but one that will challenge us and make us look at life with new eyes. If you are up for the challenge, the rewards are immense.

…being locked inside your own body, unable to move at will, unable to speak your mind.

Born prematurely and with complications at birth, twenty-three-year-old Matthew Walker is neurologically injured and diagnosed with severe cerebral palsy. Unable to speak or voluntarily move his limbs, Matt depends on around-the-clock care and has never said a word—most people, including his mother, assume he never will. Then one day, Timmy, a new assistant to Matt’s care team, is sitting at the breakfast table with Matt when he notices a couple of regular taps from Matt’s right big toe. Has Matt finally found a way to break out of his involuntary prison?

Matt–More Than Words is the story of a life without that which most of us take for granted: the ability to communicate. It is a story of suffering, abuse, loneliness, family, friendship, love, hope, and—finally—a green light, a future.