Robbie has been reading Art & Soul by Claire Huston 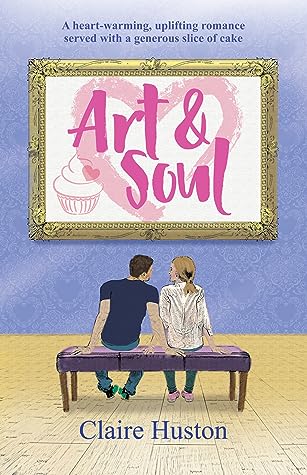 Art and Soul is a lovely romance by author, Claire Huston. Becky Watson has recently returned to work following a long maternity leave and is finding it isn’t that easy to re-establish her connections as a life coach. She has taken some jobs as an assistant at various upmarket weddings where she helps ensure that any potential people created problems are prevented or smoothed over. These jobs don’t pay particularly well and her finances are not in a good state.

Charlie is a well-known painter whose life unraveled badly after his wife left him and their young daughter several years before. His daughter and his sister are worried about his behaviour which has become more and more reclusive. He is also drinking more and is unable to paint at all. His recent painting have been harshly criticized by the art world who believe he has lost his inspiration.

Charlie’s sister contacts Claire and asks her to speak to her brother with a view to her helping him rekindle his enthusiasm for life and painting. Claire desperately needs the money so she agrees to try and help him, but knows it will be difficult due to Charlie’s uncooperative attitude. After a difficult start to their relationship, Charlie eventually agrees to try out Becky’s proposal and to re-launch himself and his work at an exhibition in only six months time. She also plans to help him rekindle a romance with a woman he fancied a while back.

I really liked Claire who was straightforward and forthright most of the time. Her only area of failure was in expressing her own emotions and feelings but that was understandable given that the father of her child had lied to her and devastated her trust. Claire has Charlie’s best interests at heart and will put her own welfare aside to help him move forward with his goals.

I like Charlie on the whole although he demonstrated a few spiteful and selfish characteristics that spoiled him a bit for me. I felt that he was a bit unpredictable and would have like Becky to have been interested in a more understanding man who didn’t lash out at her from time to time. Charlie also didn’t always come across as sufficiently supportive of his teenage daughter who really needed him.

The art aspects of this book were really interesting and I enjoyed reading about Charlie’s style of artwork compared to some of the very famous names. I also liked reading about Becky’s friend, a baker of the most delectable sounding cakes and who owned a cake shop. I am a big baker myself and I enjoyed the appearance of the odd amazing cake or two.

This was a sweet and uplifting romance baring a few occasions when Charlie fell from grace in my opinion. It will leave you routing for a good outcome for Claire and her cute son and even grumpy Charlie who has a lot of goodness about him.

There’s no problem Becky Watson can’t fix. Except her own love life…

Struggling single mother Becky Watson longs to revive her career as a life-fixer, working miracles to solve her clients’ problems, no matter how big or small. Since the birth of her two-year-old son she has been stuck preventing wedding fiascos for the richest and rudest residents of the Comptons, a charming, leafy area of southern England known for its artistic heritage.

So when semi-reclusive local artist Charlie Handren reluctantly hires Becky to fix his six-year creative slump, she’s delighted to set him up with a come-back exhibition and Rachel Stone, the woman of his dreams.

Though they get off to a rocky start, Becky and Charlie soon become close. But as the beautiful Rachel becomes Charlie’s muse, Becky is forced to wonder: will giving Charlie everything he wants mean giving up her own happily ever after?

A heart-warming, uplifting romance served with a generous slice of cake.