Today’s team review is from Georgia, She blogs here https://www.georgiarosebooks.com

Georgia has been reading Rum Hijack by Phil Motel 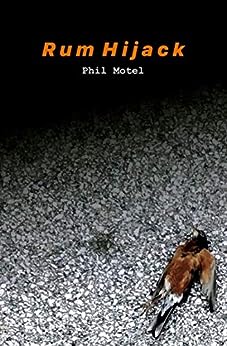 I enjoy stories told in the first person, I like getting right inside a character, being privy to all their thoughts and emotions and those of the unnamed narrator of this tale are extraordinary. Our protagonist believes himself to be the all-conquering author of a masterpiece of literary magnificence. The only problem being that he hasn’t written one word of it…yet. He lives an eccentric lifestyle in his flat and tries to channel his Grandfather’s spirit as if believing this will funnel some sort of divine inspiration that will overcome his writer’s block and allow his words to be unleashed upon the waiting world.

I thoroughly enjoyed Motel’s writing. Graphically descriptive it’s sharply quick witted and highly perceptive of this would be writer’s unusual lifestyle. An emergency potato – why haven’t I ever thought of having one of those? I loved the dark humour throughout this tightly written story and there were many, many priceless moments which made up a fabulous read.

Our narrator eventually comes up the name Inkker Hauser, in unusual fashion. His relationships are disastrous and you would never want to have him as your neighbour but I liked him very much. However, you do need to buckle up to take on the ride that is Inkker when he goes on a date with the lovely Tylissa.

He drinks a staggering amount and wanting to impress her with his intellectual and literary genius spouts all sorts of what to most people would be nonsense but which Inkker is earnestly serious about – this ‘A psychonaut. A sailor of the soul, a navigator of the mind. I happen to be something of one’ is how he describes himself to her. As the drink takes hold his behaviour becomes increasingly erratic and you can only sympathise with poor Tylissa and admire her tenacity for hanging on in there particularly when he does something that is a definite no-no in my book!

Many pages of this darkly humorous novel are taken up with the date. That might seem like a lot of words just to describe a date but every one of them is needed in order to convey the sheer craziness as it descends into mayhem for Inkker. There are so many reasons why you shouldn’t like this narrator and yet I really do. In some bizarre way, considering how he behaves, he comes across as fragile and endearing and I feel protective of him, especially when he is aware of being mocked by others.

Because it’s written in the first person we are exposed to his thoughts, feelings and anxieties and these show his vulnerability and increasing desperation as the night unravels. But nothing that has gone before compares to the pain you can feel Inkker going through when he meets his new neighbours.

They are, Claire, who calls him Inky, and Adrian, a writer of novels, and they invite Inkker to a flat warming party telling him to ‘dress fancy’ a term he misunderstands but I loved the amount of planning that went into his appearance.

Inkker’s behaviour becomes increasingly wild. He’s banned from his local, The Laughing Goat, but when he goes to make the peace in an attempt to be allowed back in he can’t help but cause more trouble. His eccentric domestic habits become more and more surreal, I mean, the mannequin, what is going on there? Towards the end his violent thoughts and destructive actions escalate to levels that wreak havoc on his life and then there is a devastating setback for him, the desperate grief that follows all consuming. And you feel it, you really do.

Excellently written I would recommend this to everyone who fancies reading something highly original and totally entertaining – and don’t we all want to do that? I truly hope to read much more from this terrific writer in the future.

A frustrated loner and book lover, convinced he is destined to write a best seller and become a literary legend – before even typing a single word – begins taking out his “writer’s block” on the local community.

Depressed and volatile, his explosive outbursts within the privacy of his own home begin to manifest in public as his increasing creative frustrations and disastrous romantic relationships pile up, causing him to become a source of amusement among the regulars at local pubs and bars – but who will have the last laugh?