Liz has been reading Death By Windmill by Jennider S. Alderson 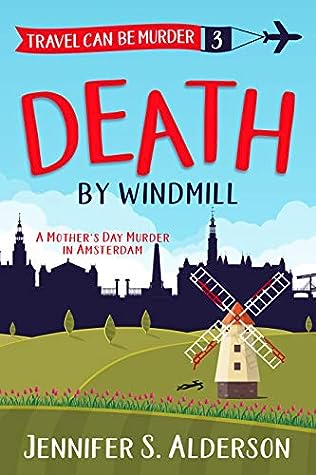 Death by Windmill is the third mystery to be solved by tour guide Lana Hansen, but this time its personal. Lana is just beginning to make up with her estranged mother when another guest on the tour in the Netherlands reveals a secret that could lead Lana herself into committing murder.  The theme is Mothers and Daughters but most of them seem at odds with each other.  While visiting some interesting sites in Amsterdam and the stunning Keukenhof Garden, we meet a number of people linked to the McGruffin company back in Seattle, many, including Lana, having been treated unjustly by its management. As the women are taken from one fascinating location to another, resentment and anger rise to the surface.

After one of their party dies, Lana must discover if it was an accident and who might have wished the victim to die. Her spirits are raised when she meets Alex, the perfect date, but will she be able to see him again? Another fast moving cozy mystery by Jennifer S Alderson which gives the reader a wonderful introduction to a holiday destination.

A Mother’s Day trip to the Netherlands turns deadly when a guest plummets from a windmill. Was it an accident or a murder? For Lana Hansen, the answer will mean freedom or imprisonment for someone close to her…

Wanderlust Tours guide Lana Hansen and her mother, Gillian, haven’t seen eye to eye in over a decade, ever since Lana was wrongly fired from her job as an investigative reporter. So when Lana’s boss invites Gillian to join her upcoming Mother’s Day tour to the Netherlands, Lana is less than pleased.

What could be worse than spending ten days with her estranged mother? Lana is about to find out…

The tour begins on a high note when the majority of guests bond during their visit to the Keukenhof flower gardens and a cruise around the picturesque canals of Amsterdam.

Despite her initial reservations, Lana thinks this might be the best group she had ever led. Until she discovers one of her guests—a recent retiree named Priscilla—is the person who destroyed her career in journalism.

All Lana can see is red. But circumstances dictate that she figure out a way to lead the tour, make peace with her mother, and not murder her guest. She doesn’t know whether she can handle the pressure.

Lana needn’t worry. Shortly after their fight, Priscilla falls off the balcony of a historic windmill at Zaanse Schans. Was she pushed or simply careless? The investigating officers suspect murder—and topping their suspect list is Lana’s mom!

Can Lana save Gillian? Or will her mother end up spending the rest of her days in a Dutch prison?