Judith has been reading Season Of Second Chances by Denise Deegan 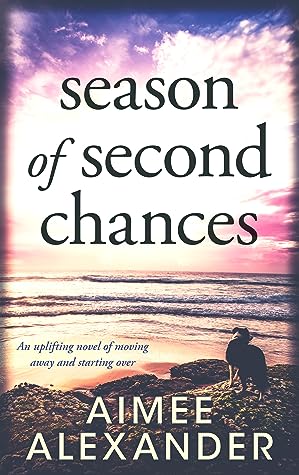 I haven’t read anything from Aimee Alexander before but, as I love any story about the machinations and intricacies of families, when I saw Season of Second Chances on the #RBRT reading list,  I decided to choose this book. It’s described as a novel about, ‘family, love and learning to be kind to yourself…A heart-warming story of friendship, love and finding the inner strength to face a future that may bring back the past.’

In a way it’s a predictable plot. But it’s so well written I don’t think that matters too much. And with a thoroughly rounded protagonist in Grace Sullivan, it’s easy to believe in her; to start cheering for her straight away in her secret quest to escape her life with an abusive husband. She is desperate to find her roots again in the  village of Killrowan, in West Cork; where she grew up with her parents. But, having been away for years, and taking her father’s place in the GP practice following his retirement, she is initially treated with suspicion by most of his patients. So she is lucky to rediscover the support of two old friends.

In addition to the antipathy of some of the villagers she has two teenage children who have problems of their own; Jack, who utterly resents the move, and her daughter, Holly, who, though glad to have escaped from their father, is emotionally damaged. But both are protective of their mother.

I also liked the parallel plot of the change in Des, Grace’s father. Having retired and in poor health, her return with her family brings him out of his chosen isolation and gives him hope for the future.

I try not to give too much information about story-lines so I’ll leave it there.

Both the main characters and the minor supporting ones are well drawn, with dialogue that immediately identifies them and I could easily picture each one as they took their part in the story.

The settings are brilliantly described and give a good sense of place. I especially liked the sense of peace that is shown through Grace when she is by the sea. There are excellent descriptions here.

There is also a lovely, almost cameo piece, of a dog, Benji, coming into their lives.

Of necessity, in a story of domestic abuse, there are themes of cruelty, fear, lies, self-hatred and loneliness. But in Season of Second Chances, there is also hope, friendship and love. These are all well balanced throughout the book.

As I’ve said, it is a predictable plot in many ways but I loved the author’s style of writing. And, tantalisingly, there are also a couple of loose ends. These left me to suspect that there would be a sequel to Season of Second Chances.As, indee, the author states in the end notes.

I would recommend Season of Second Chances to any reader who enjoys a good story in which to escape.