Cathy has been reading Taken In Nuala by Harriet Steel.

A grand party is taking place at The Residence, hosted by the assistant government agent and Inspector Shanti de Silva’s superior, Archie Clutterbuck and his wife, Florence, raising funds for the orphanage and introducing their American guests, the Tankertons and their daughter, Phoebe. Inspector de Silva and his wife Jane join the list of invitees. Also staying at The Residence is Hank O’Halloran and his daughter Marie.

During the festivities Marie O’Halloran is kidnapped and the party comes to an abrupt halt. The guests are questioned before leaving, while de Silva makes it his business to discover how the perpetrator was able to gain access to the house, evade security measures and take Marie, seemingly so easily. He wondered why the kidnapper chose Marie. Both men were wealthy but Tankerton even more so, and would be able to pay a larger ransom. It was clear to de Silva there was more to this than meets the eye.

He was on his way back to the front of the Residence when he met Archie.

[‘Anything to report, de Silva?’ The assistant government agent looked weary. Darcy, the Labrador, at his master’s heels as usual, wagged his tail, but he too looked as if he longed for his bed.

‘Only that I’m fairly certain the kidnappers made their escape over the balcony, sir, and there were two of them.’]

De Silva has his work cut out with kidnappings and murder, a suspicious fortune teller and several trails to follow, ably assisted by Sergeant Prasanna and Constable Nadar. Insight from Jane is always welcome as well. Some surprise twists keep the plot moving along. As always, the wonderfully described setting of 1930’s Ceylon is detailed, capturing the sense of place and time, and the contrast between the cultures adds an extra layer to the stories. Shanti and Jane de Silva are well portrayed, engaging characters and work well together. I like how Jane fits in with the English side of society and also as the wife of a Sinhalese Police Inspector with perfect ease. De Silva adores his wife, loves his garden, good food and his car. He sometimes takes exception to interference in his work by his British superiors.

I enjoy return visits to Nuala, the de Silva’s calm and well ordered home life and beautiful garden. Not to mention the delicious sounding meals cook prepares. If only…

When an American millionaire and his glamorous daughter visit Nuala, the splendour they bring to the town’s high society is soon tragically tarnished by a vicious crime.

With many avenues of inquiry to follow, including the involvement of a mysterious fortune teller, Inspector de Silva will need all his resources to unravel the evidence and avert further disaster.

A gripping mystery with lots of twists and turns set in the colourful and fascinating world of 1930s Ceylon. 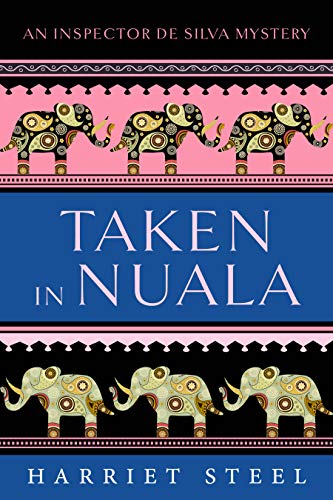