Survival is a young adult story set in Africa. A group of Nigerian students are on a flight to South Africa when their aeroplane crashes in to the Congo jungle. This is the story of those who survived the crash and the days that they spent in the jungle before they were rescued.

A quick easy read, this book considers how humans change when pushed to their limits. I liked the snippets of dialogue and mannerisms from the African culture that were sprinkled through the narrative, which made the setting believable. However, other parts of the story needed a little more depth and detail to make them plausible. This is the first book written by Nigerian author John Yusuf and I’m sure that he will gain much from this experience.

When the plane carrying a group of Nigerian students to South Africa for the annual African Colleges Competition, crashes into a Congolese jungle instead, there’s a lot at stake. These students were chosen to represent the nation, because of their academic brilliance and sportsmanship; their ability to beat competitors is the reason they are their country’s hope.

But in the jungle, there are different sets of rules … and some are being made up along the way. Thrust by Fate into hostile territory, it’s not just a question of “who” will survive. There’s also the issue of “what” – their friendships, innocence, sanity, sense of right and wrong, and hopes for the future. 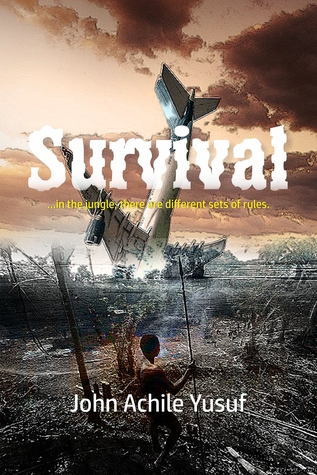