Sandra has been reading Beyond The Yew Tree by Rachel Walkley 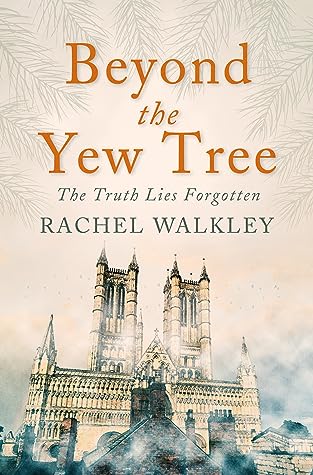 Beyond the Yew Tree is a dual-timeline story that jumps between nineteenth-century and present-day Lincoln. The pace is a bit slow at the start as we are given the background to the trial, and introduced to the main characters.

Laura is on jury service, in a case involving financial fraud at a charity for the blind, but keeps her accounting background to herself to avoid questions from the other jurors. As she gradually comes out of her shell, she grows more confident about expressing her opinions, and, by the end of the trial, is happy to give the others the benefit of her expertise.

While listening to the evidence, Laura is distracted by strange sounds only she can hear. They become the whispers of a child, and her sleep is disturbed by nightmarish visions of a Victorian gaol. Keen to discover the identity of the woman in her nightmares, Laura enlists the help of the museum curator, Sean, after a chance encounter brings them together. As it is obvious to the reader that Laura’s boyfriend, Marco, is not intending to come back, will she and Sean become more than just friends?

What seem like unconnected strands are skillfully woven together in this book which is a wonderful mixture of historical fiction, mystery, ghost story and romance. The characters are well drawn, offering fascinating insights into life in Victorian Lincoln; in some respects life now is so very different, but in others (such as the domestic abuse suffered by Bronte and her child) nothing much has changed.

The area of Lincoln around the castle and cathedral is vividly brought to life, and makes for an unusual and atmospheric setting. I had not read any of Rachel Walkley’s books before but will definitely look out for them in the future, as I found Beyond the Yew Tree to be a very enjoyable read that I would definitely recommend.