Liz has been reading The Vermeer Deception by Jennifer S Alderson 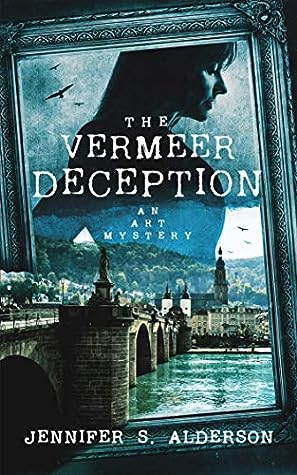 Zelda is finding her job as assistant to Art Investigator Vincent de Graaf rather boring, but while Vincent is in Croatia, she finds a clue to a Vermeer painting, stolen by the Nazis during the war. However, she must devote her time to her parents who have finally flown over from the States to visit her in Amsterdam. After a week, the family travel to Munich with Zoe’s boyfriend, Jacob, for more sightseeing. Finding herself in the street where she believes the missing painting might be, she can’t resist calling in. Here she meets Kurt Weber, the son of a wartime looter, now intending to return some of the paintings before he dies of terminal cancer.  But he is part of a network of descendants of the original Mühlmann Network and the other members have no intention of allowing him to betray them.

Zelda is stuck between the increasing anger of her mother and the evil intent of art dealers Max and Brigitte. When Kurt is found dead and there is no sign of the Vermeer painting, neither Vincent nor the police will believe there has been foul play.

The story gives us a guided tour of the Windmills of Zaanse Schans, the city of Munich and the castle in Heidelberg. The story behind the plot is based in truth and we can understand why Zelda is so anxious to solve the mystery. Bravely venturing into danger causes a rift between Zelda and her boyfriend but we are rooting for her success.  I was surprised by events in the final chapter and hope more will be revealed in a subsequent volume of Zelda’s adventures.

An art historian finds – then loses – a portrait by Johannes Vermeer in this thrilling art mystery set in Munich, Heidelberg, and Amsterdam.

When Zelda Richardson investigates a new lead about a missing portrait by Johannes Vermeer, no one expects her to actually find the painting in a retired art dealer’s home in Munich, Germany. Not her parents visiting from America; her boss, private detective Vincent de Graaf; or the rightful owner of the Nazi-looted artwork.

However, Zelda’s jubilation turns to horror when she arrives to pick up the portrait and finds the art dealer dead and several frames smoldering in his fireplace.

Was the Vermeer a fake and its ‘discovery’ a cruel joke played on a Nazi victim? The Munich police, Zelda’s family, and Vincent certainly think so.

Yet the art dealer’s best friend believes he was murdered and the real Vermeer stolen by an underground network of art looters, one established during World War II and still active today. The problem is, no one believes him – except Zelda.

Zelda soon finds herself in a dangerous game of cat-and-mouse with immoral art collectors, corrupt dealers, and an all-to-real killer who wants her to stop searching.

Can Zelda uncover the truth about the Vermeer before she is painted out of the picture permanently?

The Vermeer Deception is Book 4 in the Zelda Richardson Mystery Series. The novels in this series can be read in any order.