Olga has been reading Mountain Climbing With Dinosaurs by Doug Goodman 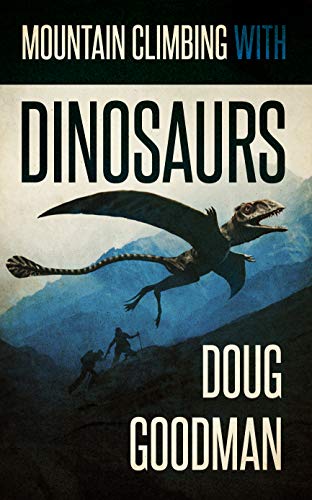 This is my first book by Goodman, and it was a ride on the wild side.  I suspect it won’t be the last of his books I read, either.

OK, from the title you probably guessed that the book is about mountain climbing. Check! It also has dinosaurs. Check! I chose the book because I thought that, in the current situation (Coronavirus, I’m talking about you again), I needed something that would grab my attention and  keep it away from what has become a reality that feels like a badly written dystopian novel. And yes, it did that, for sure, but it also did much more than that. I know very little about mountain climbing, and I’ve only attempted to climb a climbing wall once in my life (climbing wasn’t a problem, but I didn’t like the ropes and wasn’t good at handling them, in case you wonder), but I’m always intrigued by mountaineering adventures, and well, dinosaurs. I couldn’t resist the combination. But the back story of the climb was fascinating in its own right. The description only refers to it in passing, but the two twins who are the main protagonists of the story (Travis and Brady), are doing it for a very good reason. They have been climbers since they were children, recently survived a school shooting, and are doing the climb in remembrance of their dead schoolmates. Thirteen of their friends died in the shooting, and they’ve decided to climb thirteen mountains and leave a memorial on top of each one of the mountains, one of each of their friends. The book manages to touch on survivor’s guilt, and also on the feelings of those indirectly involved in the shootings, relatives of victims and perpetrators, while at the same time keeping the focus on the climbing and the dinosaurs (and these are not the friendly kind, believe me). It keeps a good balance between pure adventures and more serious topics, and although at times the most technical aspects of the mountain climbing got lost to me, that didn’t impede my enjoyment of the story. I don’t want to go into the plot too much, because although some of it you can probably imagine, there are subtler aspects that are best left for readers to discover.

I have talked about some of the themes of the book. The dinosaurs, that I guess will be one of the main attractions of the book, are not the best-known and most familiar to the general public, and the creatures, that in this story have been brought back to life by Big Pharma, seem well –researched (although I’m no authority on dinosaurs). Not being an expert in mountain climbing, as I said, I cannot judge how accurate the techniques and equipment mentioned are, but they rang true to me, and I again think the research has paid off. The book also deals in themes that I was more familiar with, like the psychological aftermath of a school shooting, and it does so with a fine touch and sensitivity. Although the writing style is completely different, it reminded me of Hunter Shea’s Creature. That also made me think that although the dinosaurs are “real” within the book, they could also be read as symbolising what the twins are going through, and so could some of the other strange events that happen within the novel (and I’ll keep my peace about that as well).

This is not a book with many characters, and most of the action is narrated in the first person by one of the twin climbers, Travis, so we get a very direct perspective on what is going on, and an insight into how he sees events, and also how he remembers the things that happened, and his understanding of his brothers’ actions and feelings. We also get some short inserts where the cameraman interviews relatives and friends of the twins, to help him create the documentary of the climb. These characters are not part of the action, but those fragments offer us a different and larger perspective into the twins, and also into their background and their previous stories. The two twins are the main characters, although the filmmaker and the photographer also play a small part in the main action. But there are other characters that also pertain in the story, because their memory is very much alive, and those are some of the other victims of the shooting, and though we don’t get to know them all individually, we feel them there every step of the climb. The dinosaurs are also characters, and we get enough information about them to get a good sense of their different outlooks and characteristics. I wouldn’t want any of them as pets, believe me!

The writing style is direct, and easy to follow (apart from the use of specific mountain climbing terminology at times), and there is enough description of the mountain, the climbing techniques, and the dinosaurs to allow readers to get a clear picture in their minds (yes, it would make a great movie, if the special effects were done well). There are some instances of telling rather than showing, necessary to provide the information general readers would need to understand the action and the behaviour of the dinosaurs, but they do not interfere with the flow of the story. As I said, most of the novel is written in the first-person, and I know some readers don’t like it, but I thought it suited it well. Some scenes are quite violent and graphic, so I wouldn’t recommend it to squeamish readers. As I always say, I’d recommend future readers to check a sample of the novel and see if they think the style suits their taste.

The ending is suitable to the genre of the book —I don’t think anybody would expect a conventional happy ending—, but I thought it worked well, considering the story and the events. And yes, the epilogue was very fitting. A quick word of warning. The story only occupies 90% of the e-book, and it’s followed by a teaser from another book, although I confess I wouldn’t mind reading Demon Flyer at all.

A solid read, with its scary moments (it did remind me of Jaws at times), and a deeper and more meaningful story than most readers would expect from the title. It demonstrates that any book can be improved by the introduction of a dinosaur, or a few.  Recommended to lovers of mountain climbing, dinosaurs, and to readers looking for creature horror with a bit of backstory and depth.

I’d suggest to the writer and publishers the inclusion of a list of mountain climbing terminology, with links, and also a list of the dinosaurs and their characteristics, as that would avoid distractions and enrich the reading experience.

Take the next handhold. Stretch your fingers as far as they can go. Hundreds of feet above the ground, don’t look down. Keep climbing. There are dinosaurs nearby, hiding in the cracks and holes of this ugly mountain wall. New Profanity Peak, they call it. These nightmarish creatures may remind you of the mass shooting you survived and your dead friends, but don’t stop moving. Keep pushing upward. Rise up. Memorialize your fallen friends.

When the big wall reduces to smooth glass, dig deep. When it shows you an impossible overhang, find a way around it, but hurry. Dimorphodons are called the Wolves of the Sky for a reason.

Climb faster. Claw your way out of that deep dark pit in your soul, the one that knows the truth about the mass shooting.