Olga has been reading The Latecomers by Rich Marcello 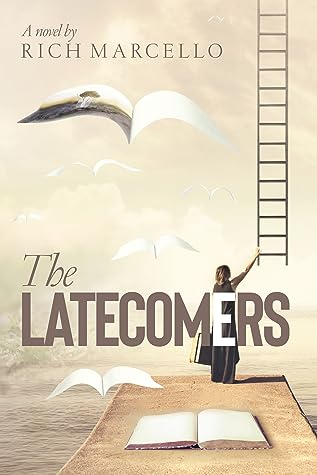 I have read and reviewed another novel by Marcello, The Beauty of the Fall (you can read my review here), was entranced by it, and I was eager to read this book, although worried that, at least for me, the previous novel would be a tough act to follow. This book has many of the qualities that made me love the previous one (beautiful language, gorgeous descriptions, a spiritual dimension, a search for personal truth, and many strange and wondrous events that sometimes are difficult to categorize [are they visions, hallucinations, visitations, a transcendental connection with the gods and the elders, enlightenment?], and little interest in following the standard rules of narrative. Yes, there is a beginning, a middle and an end, of sorts, but one sometimes feels as if there were many corridors the characters could choose, which might end up resulting in a variety of futures and of novels, and at times we get hints of those. Somehow, though, it didn’t move me in the same way the previous book did, and that is perhaps down to current circumstances. Reading this novel in the middle of a pandemic, while confined at home, made me feel uneasy about some of the characters’ decisions, their self-absorption, and the ease with which they make decisions that might potentially affect many people, with little regard for anybody else’s interests.

The book is divided into two distinct parts, the first one told, in the first-person, by the two main protagonists, Charlie and Maggie Latecomer, now in their second marriage, seemingly happy, who after successful careers are now pursuing their own artistic interests. Suddenly, despite their deep love for each other, Charlie, who’s been feeling restless, decides he has to go in pursuit of his own path. He tells his wife this and goes on a retreat. Not only that, but he asks a young woman to accompany him. The couple was completely enmeshed in each other, and although Maggie loves the idea of the MOAI, a Japanese concept that they define as a sort of extended family, she acknowledges that she’s resisted including others in theirs. She starts to question everything she had thought, makes new connections and renews some of the old ones, and when the retreat ends in quite a traumatic manner (I ‘ll avoid spoilers), there is a reconfiguration of their MOAI and new people join in. They also go through some life-changing experiences together. This part is more contemplative, more descriptive, and slower than the rest of the book, and I felt somewhat impatient with Charlie, whose behaviour and reasoning I found quite difficult to accept, in light of his protestations of love and of not wanting to hurt Maggie. I liked Maggie much better than Charlie, and although by the end of the book I was more reconciled with Charlie’s character, because he’d gone through quite a lot of change, I still felt more empathy for Maggie, even if I had little in common with any of them or the rest of the characters in the novel (even if I have visited Northampton and enjoyed the descriptions of the town and also of the island and the retreat).  There are more adventures in part two: we have a mystical book that the characters keep trying to decipher, they uncover a secret, they have to fight a big corporation, and they go through much heartache. The rhythm picks up in the second half, and I felt that was partly because we only get to see things from Maggie’s point of view, and she is more determined, action-driven, and even rushed at times.

There are quite a few themes in the novel, including relationships (love, extended families), growing old, health (what does it mean to be healthy and what price would we pay to live longer), pharmaceutical corporations, end of life care, spiritualism, identity, philosophy, religion, mysticism… There is a search for meaning and for finding one’s place in the world that is quite refreshing, especially because the protagonists are not youths trying to decide what to do with the rest of their lives, but older characters, who refuse to be settled and give up (and although I did not connect with some aspects of the book, I definitely connected with that). I do not know much about Nordic mythology and therefore I felt at times that I was missing much of the background that might have allowed me to understand the characters’ experiences better, and that made me feel somewhat detached. The novel is classed as literary fiction and magic realism. Both genres cover a great variety of styles, subjects and reading experiences, and readers who enjoy philosophical themes and like a challenge should give it a try.

I have mentioned the two main characters, and I have said that there are a few others: three that end up becoming a part of their extended family, two elders (both women), another female character who is the spiritual guide, some of the other people attending the retreat, and the baddie (who is never fully explained). I’m not that far of, by age, from many of the characters, but I can’t say I have much else in common with them, as they are all fairly well off, (one very rich), and in general seem untouched by the worries of everyday life. Although we spend time with some of the other characters, and I particularly like the two elders, I did not feel we got to know the rest of the MOAI well enough, considering the length of the novel and the amount of time we spend with them. Part of the problem might be that it’s all told from the first person point of view of the two protagonists, but the decisions of Joe, Ebba (she’s a total puzzle to me), and Rebecca (I liked her but I would have liked to know more) don’t always seem to fit in with what we know about them. But an important part of the novel deals with the fact that no matter how we feel about others, and how connected we are, that does not mean we are the same and we have to live by the same rules and share in all of our experiences. We all have to strive to be the best versions of ourselves.

I have mentioned the writing style at the beginning of my review. There is poetry and lyricism, and as I mentioned above, there are also many contemplative passages. This is not a fast book and there are many descriptions or landscapes, mystic experiences, and also philosophical wanderings. The characters have their own rituals and these are described in detail (and yes, there are descriptions of their art, their shared experiences, their memories, their sexual relationships, although not too explicit…), and I think that readers will either connect with the writing style or not. The quality of the writing is not in question, and the fact that Marcello writes poetry is amply evident, but it won’t suit every taste.

The ending resolves the main points of the plot, although not all mysteries are explained, and there are aspects left to readers’ imagination. I liked the ending, although I had been expecting it for quite a while and at some point worried that the characters wouldn’t do what seemed to be “the right thing”. It’s a difficult decision and not one many people would take in real life, but, at least for me, it made sense.

Would I recommend it? You’ve probably noticed that I’m conflicted about this novel. There is much I like about it and some aspects I don’t like as much, although I think I might have felt different if I had read it in other circumstances (and might come back to it later on). In summary, this is a book for those who like to savour a novel and who enjoy thinking deeply and exploring unusual avenues. It is not a book for those looking for a tightly-plotted story, a mystery, or a fast page-turner. There are mysteries, but not those of the kind we expect to read about in novels of the genre. The protagonists are privileged in many ways, older than the norm, and their search and struggles might not connect with everybody. I’d recommend readers to check a sample of the book, and to give the novel time, because it changes and grows in the second half, as do the main characters, Charlie in particular.  Ah, members of reading clubs have a set of very interesting questions at the end, and I agree this is a book that offers plenty of food for discussion.

Maggie and Charlie Latecomer, at the beginning of the last third of their lives, love each other but are conflicted over what it means to age well in a youth-oriented society. Forced into early retirement and with grown children in distant cities, they’ve settled into a curbed routine, leaving Charlie restless and longing for more.
When the Latecomers and their friends discover a mystical book of indecipherable logographs, the corporeal world and preternatural world intertwine. They set off on a restorative journey to uncover the secrets of the book that pits them against a potent corporate foe in a struggle for the hearts and minds of woman and men the world over.
A treatise on aging, health, wisdom, and love couched in an adventure, The Latecomers will make readers question the nature of deep relationships and the fabric of modern society.