Georgia has been reading Head On Backwards, Chest Full Of Sand by Sandy Day 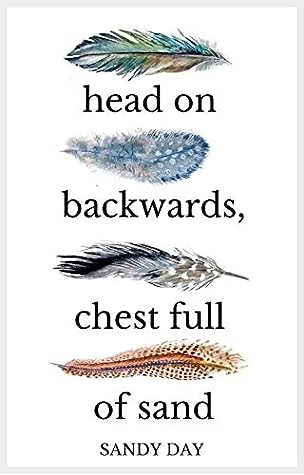 Livvy (definitely not Libby!) is a young woman who goes to stay with her aunt, Donna, in Cape Breton. She describes it as a wildly romantic and artistic place, not unlike Livvy herself, who is a poet and besotted with the love of her life, Kane.

The idea is, as far as Livvy is concerned, that she will write to Kane, back in Ontario, telling him all about the place and he will follow her out there. No one knows of their intention to stay out in Cape Breton together, especially not her parents who are not supportive of the relationship, and Livvy is relieved to get to be with Donna, one of her best friends, and someone who understands her.

Livvy spends time with her cousins, Hellah and Piers, and where one relationship strengthens the other becomes more distant, and it’s not hard to see why. Livvy is obsessed with Kane and I could imagine those around her rolling their eyes as yet another tale about him began. She writes to him every day, at least once, as well as penning copious amounts of poetry. The cracks soon start to appear though as we see that all is not as it seems with this relationship.

I thoroughly enjoyed this book. It’s relatively short at 121 pages but filled with teenage angst and I felt for Livvy as it became clear, to the reader at least, what was going on. The writing is excellent and flowed with wonderful light touch descriptions that told me all I needed to know. Recommended for all those who like a well told tale.

Teetering on the edge of womanhood, clinging to the first love of her life, 17 year-old Livvy is torn between suppressing herself or claiming her identity and independence.

A tale of love-obsession, Head on Backwards, Chest Full of Sand chronicles a young woman’s coming of age during the height of the 1970s women’s liberation movement.

When Livvy, lovesick and artistic, spends the summer with the aunt she adores, she crosses paths with a cast of memorable characters in the coastal community of Margaree, Cape Breton Island.

While Livvy’s cousins torment her, house renovations disturb her, an annoying young islander tries to befriend and teach Livvy to disco dance, Livvy prepares for the much anticipated arrival of her boyfriend, Kane.

This deep dive into the dire and agonizing crannies of a love-obsessed young woman will establish Head on Backwards, Chest Full of Sand as a memorable coming of age story.

For fans of The Girls Guide to Hunting and Fishing, Lives of Girls and Women, and The Bell Jar, Head on Backwards, Chest Full of Sand immerses the reader in the world of a troubled young woman coming slowly to terms with love, life, and all its messy relationships.