Lilyn has been reading Hybrids by Jennie Dorny 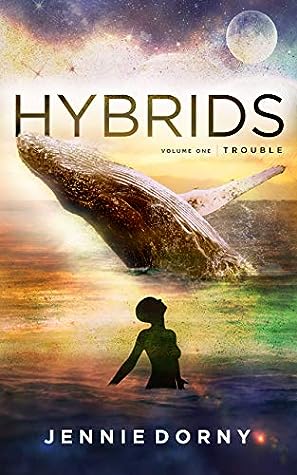 This first volume of Hybrids, Trouble, was a problematic read for me. So much so that I actually started over when I was twenty-five percent in just to see if there was something I was obviously missing. Sometimes you just aren’t in the right mood. Sometimes you’re too distracted. Sometimes there’s a wonderful story buried in a book that trips over words or phrases that jar the senses and distract the reader.

As you might have guessed, for me I feel like this volume of Hybrids falls under the third choice. The core story itself is a good one, but there were just too many times when reading that I had “Eh, what?” moments with word choice.

One thing that really hampered the story for me was how long it took to get any sort of idea of what the characters look like. There is the vaguest of descriptions given: Tall, lithe, long straight hair, etc. Now, it could have been a deliberate choice to keep it vague, and I won’t say that it’s wrong, but it did affect how I read the book. I’m someone who visualizes as I read and the main characters were stuck at pretty much bipedal basic, bland looks for me and in a sci-fi book set on an alien planet… bipedal basic doesn’t work well. It doesn’t help that there are a lot of character names that start with similar letters: Declan, Dylan, Davin, Terri, Theo, Munroe, Matt, Morning, Aslone, Ashta… Vague characters with similar names just doesn’t work.

I know I started off on a negative foot, but there are things about Hybrids, Volume One: Trouble that I liked. Eridan is a fascinating planet, and the author obviously put a lot of thought into the culture of the people on it. I love the idea of Mocean – a living ocean. I would kind of like to pull just the story of Eridan out and see a story set just on it, involving just its people. A little more focused. It really is a fascinating place. It also reads very quickly. It’s almost 450 pages, but it doesn’t really feel like it. There’s a lot going on, so plenty of action if you need it.

Hybrids, Volume One: Trouble, unfortunately, did not work for me as a whole. However, the world of Eridan will stay with me, and I liked the broad strokes of what the author was doing here. If you like space opera type reads, this might be up your alley.

She sought refuge on an ocean-covered planet. She didn’t learn its codes until too late. Now she must leave to survive.

Theo’s dreams of exploring distant lands are cut short when her father betrays her.

On the run, she flees to Eridan, where Washone, the spiritual leader, is expecting her. As she is about to reach this ocean-covered planet inhabited by telepaths, she is kidnapped by a bounty-hunter. Ashta, an Eridani Savalwoman, befriends Theo, rescues her, and they land together on Eridan.

While Theo trains to become a Savalwoman – a warrior – bleak memories of past hurts relentlessly disrupt her attempts to trust herself and others.

She is unaware of her own mental powers, so when she believes that she has been betrayed once again – this time by Ashta – she nearly destroys her friend’s mind in a fit of wounded rage that blazes across the planet.

To protect Theo from those who, like ambitious Keith of Rain Forest, would like to use her powerful mind for their benefit, Washone decides that she must leave Eridan.

Can Theo convince Washone to let her stay? Or will she have to leave her new friends and go on the run again, with no place to go?

To find out and meet many other vibrant characters, pick up Trouble, the first volume of HYBRIDS, and plunge into Eridan’s ocean!

Science-fiction codes and settings serve as background to HYBRIDS, a four-volume novel by Jennie Dorny, aimed at general readers as well as speculative fiction fans.