Finding Clara is a World War Two historical fiction set in Essen. The year is 1946 and the story features Clara, the daughter of a German Industrial family. For two years she ran the family iron works in the heart of Germany’s steel and coal producing area during the war.

When the Allies drew closer in 1944 and chaos in Germany loomed, Clara escaped Essen, leaving it all behind. Now she returns, searching for her best friend. However, the Allies are seeking out war criminals and Clara is unsure of what she will discover.

Scott has created a believable picture of post-war Germany and how the people of Essen attempted to survive. In the heart of the Ruhr, Essen had been a target for strategic bombing of the arms factories for much of the war and whole areas were destroyed.

Clara is presented to the reader as a mystery; was she a Nazi supporter or just a victim of circumstance? Scott shows us glimpses of Clara’s life and how she came to be trailed by a top war crimes investigator. Seeing events through Clara’s eyes was refreshing compared to many other books in this genre, but part of me always held back from fully empathising with her. I certainly enjoyed the unravelling of the story around her family, but I was hoping for it to take a darker turn, especially towards the end.

Overall, an interesting direction for a book in a popular genre, but I thought that the story lacked the necessary edgy grittiness.

Clara. Once a wartime icon and heiress to the Falkenberg iron works; now on the run from the Allied authorities, accused of complicity in her father’s war crimes.

Jakob. A charming black marketeer, badly wounded in the war but determined to help what’s left of his family survive the peace.

Willy. A teenage boy diligently guarding a mine full of Wehrmacht supplies, his only friend a canary named Gertrud. Convinced the war isn’t over, he refuses to surrender his post.

When Clara returns to her hometown expecting to find her best friend, she finds everything she once knew in ruins. But in war-ravaged Germany, it’s not just the buildings that are scarred: everyone is changed, everyone lives in the wreckage of their own past.

To survive, Clara must hide who she is. But to live, she must face up to the truth of what she’s done. 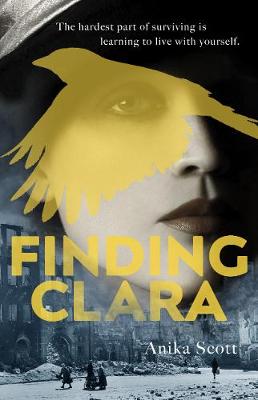