Today’s team review is from Judith, she blogs here https://judithbarrow.blogspot.com/

Judith has been reading Still You Sleep by Kate Vane. 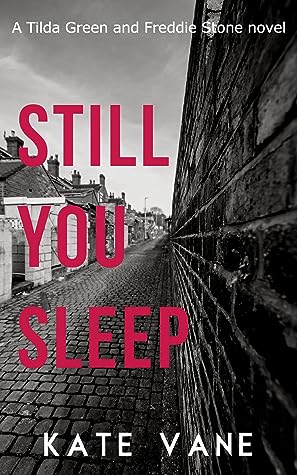 I like the writing style of  Kate Vane, she keeps the reader on their toes with this fast moving and complex story. It’s engrossing and I enjoyed each of the plots that are woven together in this book.

But I do have reservations about the amount of the scenarios: the drug scene, the twists and turns of personal relationships, the machinations of the politician despite the facade of decency and his contrivance to be one of the people, the deprivations of a run-down and crime-ridden housing estate and the protests and justified insurgence. I often needed to go back to catch up on how one scene ended, perhaps a couple of chapters before, in order to pick up the particular thread of the one I was starting to read.

Nevertheless, the characters of each part of the story are well drawn and interesting, so it was easy to either dislike or empathise with most of them, especially when they overlapped in scenes. The main characters, Freddie Stone and Tilda Green gel together well despite their contrasting age and outlook and, I’m presuming, they are a combination that will appear in future books.

I would have liked to have found out more about the victim in the book,Vikki Smith; the subject of the title. She is only spoken of through the other characters, so I didn’t feel that I really got to know her. Yes, I know she’s already dead. And I know this isn’t the kind of book that perhaps wouldn’t benefit from flashbacks. But still…

The book has a very contemporary feel with so much inclusion in the dialogue of social media but I did wonder if this would inadvertently date the story. And some of the explanations in the dialogue of the intricacies of Twitter and the Dark Web did rather bore me. But this is merely a personal observation and I’m sure other readers would find these fascinating.

However, other than that, the scenarios I mention above are believable and well written.

I did like the ending; the drawing together of the story. The juxtaposing of the beginning and the denouement were satisfying.

All in all, I feel justified in giving Still You Sleep four stars and would recommend the book.

Why wasn’t she safe at home?

Vikki Smith was a young woman with a learning disability, living independently for the first time, when she died of a drug overdose.

The police think it could have been an accident, but messages on social media suggest someone was exploiting her death for their own ends – before it was even announced. Her mother is convinced it was murder.

Redundant crime reporter Freddie Stone is a family friend. He wants to help them – and his failing career – but he’s a people person. He asks online journalist Tilda Green to work with him.

Tilda is curious, passionate and runs her own campaigning news site. She’s open to everything except compromise. But she’s intrigued by what Freddie tells her and agrees to work with him – for now.

Tilda thinks the trolls are organised and have links to hate groups. A charismatic local politician is determined to take them on. Some question his motives but Tilda trusts him, maybe too much.

Freddie believes the answer to Vikki’s death lies on the estate where she lived, if he could only get someone to speak out. He wants to know who was bringing drugs into Vikki’s home. He chases old contacts while struggling with his new life.

Beyond the virtual hate and her neighbours’ silence, someone knows who killed Vikki. Tilda and Freddie are determined to find the truth and tell her story.