Liz has been reading Death By Baguette by Jennifer S Alderson. 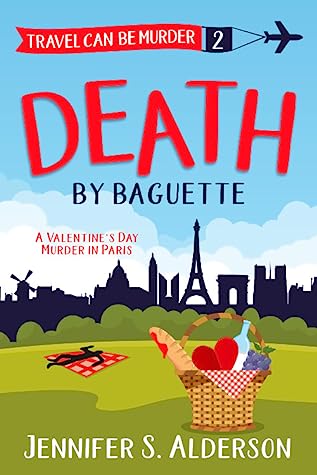 Death by Baguette is the second murder mystery involving quick-witted Lana Hansen. A helpful, efficient tour-guide, she takes small groups of wealthy American tourists on organised visits to popular destination.  This is also Lana’s first visit to Paris, but she is well prepared and nothing phases her, except discovering her new boyfriend, Chad, is one of the guests and he’s married! Visiting Paris, the city of love, in time for Valentine’s Day sounds idyllic for the couples she accompanies but most of them have relationship problems, including Lana’s friend Willow and her partner Jane.  Luckily Lana’s new assistant Randy Wright is very helpful, if rather nervous.

The plot is gradually revealed as we travel with the group, viewing the Louvre, the Rodin Museum and the cathedral at Chartres.  Most of these places are familiar to me but I enjoyed the vivid but not over long descriptions of the attractive features.  In fact, the book would be an excellent introduction to anyone planning their first encounter with the city.

As many of the group become increasingly antagonistic towards each other there are plenty of suspects when Chad suddenly collapses, poisoned during a picnic under the Tour Eiffel.  Even Lana and her friends are persons of interest to the French detective.  She turns her mind to investigating everyone in the party, aided by a journalist friend back in Seattle, but in the dramatic denouement Lara depends on the help of others.

Like the first book in the Travel Can Be Murder series this cozy mystery is fast moving, entertaining reading and I am hoping that in future episodes Lana will have more success in finding a successful romantic partner.

Death by Baguette: A Valentine’s Day Murder in Paris

Paris—the city of love, lights … and murder? Join tour guide Lana Hansen as she escorts five couples on an unforgettable Valentine-themed vacation to France! Unfortunately it will be the last trip for one passenger…

Lana Hansen’s future is looking bright. She has money in her bank account, a babysitter for her cat, and even a boyfriend. Regrettably she won’t get to celebrate Valentine’s Day with her new beau, Chad. Instead, she will be leading a lovers-only tour in France. Luckily for Lana, her best friend, Willow, and her partner, Jane, will be joining her.

Things go downhill when Lana’s new boyfriend shows up in Paris for her tour—with his wife. Chad is not the website developer he claimed to be, but a famous restaurant critic whose love of women rivals his passion for food.

After Chad drops dead during a picnic under the Eiffel Tower, a persistent French detective becomes convinced that he was poisoned. And the inspector’s sights are set on several members of the tour—including Lana!

While escorting her group through the cobblestone streets of Montmartre, the grand gardens of Versailles, and the historic Marché des Enfants Rouges market, Lana must figure out who really killed Chad before she has to say bonjour to prison and adieu to her freedom.

Introducing Lana Hansen, tour guide, reluctant amateur sleuth, and star of the Travel Can Be Murder Cozy Mystery Series. Join Lana as she leads tourists and readers to fascinating cities around the globe on intriguing adventures that, unfortunately for Lana, often turn deadly.