Olga has been reading The Earthling’s Brother by Earik Beann 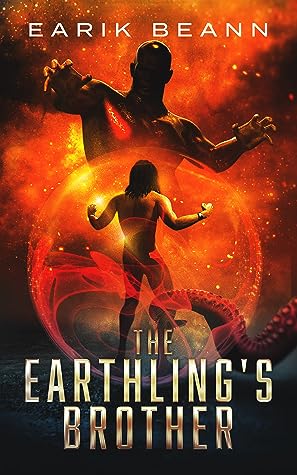 I have read two other books by Beann, one a science-fiction novel and the other a non-fiction book, enjoyed both, and loved the cover and the premise of his new book, and I’m pleased to say that I wholeheartedly recommend it as well.

The book reminded me of yesteryear science-fiction movies, but with a touch of self-awareness, humour, and diversity that made it thoroughly modern. It made me think of The Day the Earth Stood Still, Starman (the movie) and, to a certain extent, Terminator, especially the beginning, although here we have a bit of a twist, and more than one being from outer space (but I’ll try not to spoil the story).

The story is not hard science-fiction, and I suspect lovers of detailed scientific explanations and high-tech might find this book too light, but the setting is very compelling, there are plenty of adventures, and lots of fun to be had. And the characters are all winners.

Maria Rodriguez is a great protagonist. She works hard, loves her sick nephew and tries her best to help him get better, looks after everybody, and she is willing to help, no matter what. She gives “Sam” the benefit of the doubt, even if she thinks he is under the influence of some drug or other and a bit weird, and she ends up being pulled into an adventure that we’d all love to find ourselves in. Sam is another great character, like a grown-up child, and allows us to see ourselves from a completely fresh perspective. What would somebody from another world think about us? Mustafa… Well, I won’t tell you anything about Mustafa, other than he’s amazing, and we also have a proper villain (I’m talking about you, Sanders), and some other not very nice characters, although they don’t get off lightly. I particularly liked “Mother”, which is quite a special character but shows a great deal of insight into the workings of the world, despite her limitations, and Pepe… I think all readers will love Pepe.

The story has a bit of everything: there are some quasi-magical elements about it (be careful what you wish for!); we have police persecutions and interrogations; we have references to migration policies and to asylum hearings (this is priceless!); we have alien civilizations intent on destroying the world as we know it; trips to Las Vegas and big winnings at the casinos; a road-trip; flying secret planes; a stand-off between USA and Canadian soldiers, and even a little bit of romance thrown in.

The writing style is smooth, easy-to-read, and there are plenty of action scenes, humour, suspense, and some pretty scary moments as well. Although there is destruction, mayhem, and violence, it is not very extreme or explicit, and most of it is only referred to in passing. All these elements, and the story, that has an all-around feel-good happy ending, make this book perfect for YA readers, in my opinion, and I think older children might enjoy it as well, although I’d recommend parents to check it out beforehand.

In sum, this is a joy of a book. It can be read as a fun and light sci-fi adventure book, although it does deal in topics that are serious, current, and it has a message that humanity would do well to listen to. It suits all ages, and it leaves readers smiling. What else should we ask for? (Oh, and I especially recommend it to any Canadians out there!)

Sam never knew his parents. In fact, he’s never met another human—or seen a sunrise, smelled a flower, or eaten a regular meal. All of that is about to change.

It’s night in the desert, but he doesn’t feel the cold. The sky is clear, and the stars twinkle at him. He has never seen the sky from Earth before. Everything looks so strange. So . . . alien. He shakes his head in wonderment and laughs. He can’t stop smiling. This is Earth!

There is a building ahead. Other people will be inside. His heart skips a beat as he takes a step forward, the rocks crunching under his bare feet. He has dreamed of this moment for as long as he can remember.

But that which can be found can just as easily be lost again. It would have been better had Sam’s arrival gone unnoticed. But the artificial life form known only as the Authority is not one to miss such things. Nearly as old as time, and almost as powerful, the Authority was built by an ancient civilization as both an enforcer and a war machine, the destroyer of worlds. It has been watching Sam his entire life. Watching, and waiting, and judging. And now, it has decided that it’s time to act.