Sandra has been reading At Arm’s Length by D.E. Haggerty 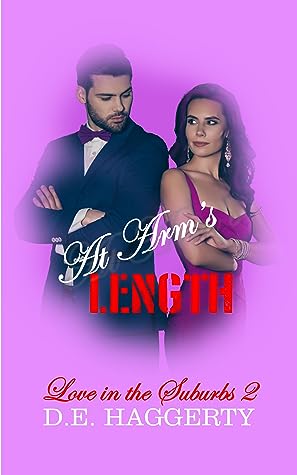 Why does Jackson always give Shelby such a hard time? While you could easily read this without having read the previous book in the Love in the Suburbs series, About Face, I always like to start at the beginning in case I miss something. Jackson is Shelby’s friend Frankie’s business partner and she likes him but can’t understand why he’s so off with her. Shelby is a freelance computer game software developer and geek, with a slightly unorthodox sense of style and a Star Wars obsession.

This book is not about the plot – there isn’t really much of one – but the characters; they are so vividly drawn they positively jump off the page. Having read a lot of books, I know this can be quite a difficult thing to pull off successfully.  How many books have you read where the main characters are simply not believable, but more  like cardboard cut-outs?

I noticed something that happens in all the books I have read by Ms Haggerty; the men (Jackson and Brodie included) are all a bit macho and overprotective of the women; maybe this is how American readers like their men to be? In the end I just found it amusing – most British men don’t behave like that. I also thought she used the word ‘growl’ to describe how the men speak quite a lot!

Once again Frankie’s grandma features heavily in the story, and she’s up to her old tricks – matchmaking! Somehow, she gets Frankie and all her friends to come to Sunday dinner every week, and is not happy until they have a partner (she even had the others betting on how long it would take Jackson and Shelby to get together). She would be so annoying in real life, but is hilarious in the book. There is more humour in the chapter headings; song lyrics have been turned into witty one-liners. It’s fun trying to work out which songs they came from. I really enjoyed At Arm’s Length and look forward to the final book in the trilogy which will be about Bailey and Luke.

Jackson Schmidt is the biggest jerkity jerk ever. They should totally erect a statue to commemorate his jerkityness, jerkdom— Uggh! There are literally not enough words for ‘jerk’ to depict the man.

Unfortunately, Jackson is also the most gorgeous specimen of manhood I’ve ever laid eyes on. One look at him and I want to jump and climb him like a tree. But whenever he opens his mouth, his status as the biggest bastard on the planet is immediately reinstated. It’s impossible for the man to say anything remotely nice – at least not to me. To my best friend, though? To her, he’s Mr. Perfect Gentleman. Did I mention he’s carrying a torch for my engaged best friend?

My libido does not give one flying hoot Jackson is a dick who has a crush on my bestie. Nope. Not at all. No matter how much of a schmuck the man is – and trust me he takes schmuck to the next level – I continue to pant after him like a nerdy freshman crushing on the prom king. If I want to keep my sanity, I’m going to have to keep Jackson at arm’s length.