Olga has been reading Collateral Carnage by Chris Saper 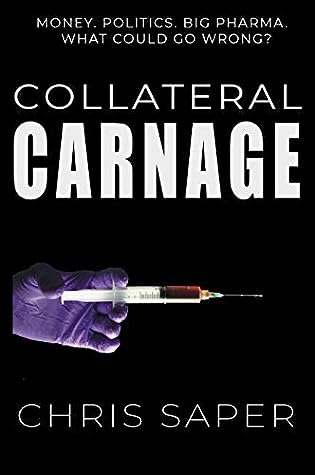 Having worked in the health services (although in the UK) for a number of years, and having treated some patients suffering from PTSD (although I’m no specialist), I was intrigued by this debut novel. I was even more interested when I read the author’s biography and learned of her first-hand experience as a healthcare administrator, as that promised to bring an insider’s perspective into the topic and add complexity to the plot.

This novel is perfect for readers who love conspiracy theory plots and also spy novels. I must confess that I am not much of a reader of spy novels, because I tend to get lost in the huge number of names, where characters often swap identities, and sometimes find it difficult to tell the different players apart. There is some of that here, because we are thrown at the deep end from the beginning. There’s no gentle easing into the subject or much background information provided before we get into the nitty gritty of the story, and the fact that we don’t know what’s happening parallels the experience of the main character, Claire Wilheit.

The story is narrated in the third person, but from a variety of points of view (I’d say almost as many as characters, or at least as many as characters that have some bearing into the outcome of the novel), and although some characters appear often and we become somewhat familiar with them, there are others that only make a fleeting appearance. The point of view, although clearly signalled, can change even within a chapter, and not all readers feel comfortable with so many changes. Chapters are short, the story moves at a quick pace, and although the language is straightforward, and there are no unnecessarily long descriptions, readers need to remain alert and attentive. This is not an easy and relaxed read; the plot has many strands that might appear quite entangled and confusing at first, but if one keeps reading, the story becomes clearer and the subject is both compelling and gripping.

Personally, I felt that this is a story heavier on plot than on characters. There are quite a number of characters I liked (mostly on the “good” side, although I felt some sympathy for the motives of some of the characters on the “bad” side as well), especially Claire, who is determined, intelligent, resourceful, and has managed to overcome pretty difficult circumstances, but because there are so many characters, and they all take their turn, it is difficult to get to know most of them in depth. I think that was in part the reason why, at times, I felt like an observer of the plot and the story, rather than being fully involved and sharing in the experiences of the characters. The end of the novel hinted at the possibility of further adventures involving Claire and some of the other characters (I’m trying to avoid spoilers here), so readers might learn much more about them.

I “enjoyed” (well, it worried me, but you know what I mean), the insight into the pharmaceutical industry, the way the novel spells out the relationship between Big Pharma and politics, and the reflections on how the healthcare system works (or rather, might end up working) in the USA. One of the aspects of the novel that I found captivating was the dystopian edge of the story. I haven’t seen it listed as a dystopia, but it is set in the very near future, with a social order very similar to the current one, but with subtle differences, or perhaps one could call them “developments” that, unfortunately, fit in well with recent events and with the way things are progressing. In the book, the efforts to control costs have resulted in the privatization of ever more services —the police force in Phoenix, for instance, deals with certain kinds of crimes, but at night there is a Militia in charge, and there is a curfew in place—, including the healthcare of the veterans of the many wars that the American military has participated in, and there are large interests involved in all these services. And, of course, those can be manipulated by less than scrupulous people. The most worrying part of the story is that it feels very realistic. It does not take a big stretch of the imagination to see something like this happening, and perhaps with an end far less satisfying than that of the novel (which I liked).

In summary, this is a novel for lovers of conspiracy theories and/or fairly realistic spy thrillers, that like puzzles and complex plots and don’t shy away from hard topics. The author injects her knowledge into the story without overwhelming it and the research is well integrated into the plot. There is no graphic violence and no romance here but a dire warning of how things could end up if money continues to be the governments’ (not only that of the USA) only consideration when dealing with people’s wellbeing. The characters are not as important as the story, but I think there is room for their development in future instalments. As a note to the author, I wonder if a list of characters might help people not to get lost, especially at the beginning of the book. I know that because of the nature of the plot, it might be difficult to do that without spoiling some of the surprises, although there might be ways around it. I will keep a close watch on the author’s writing career.

Money. Politics. Big Pharma. What could go wrong?As PTSD therapist Claire Wilheit is about to learn, a whole helluva lot. A chance after-hours encounter with a fellow therapist reveals falsified patient files and thrusts Claire into a conspiracy poised to revolutionize treatment for US veterans now and for future generations, with deadly collateral damage.Trapped in an avalanche of events over which she has no control, Claire is locked into a race against time in preventing the sweeping, irreversible and fatally flawed policies that Congress is about to set into play.