Cursed Is book one of The Thrice Cursed Mage urban fantasy series.

Mac Brennan wakes up in a dustbin which is about to be emptied, knowing little more than his name. One arm is blackened with runes that he didn’t think he had before.

Stinking from other people’s rubbish, Mac goes to a laundrette hoping to steal some clean clothes. However, he gets involved in a fight to protect a woman from two thugs that he later discovers are werewolves.

In his search to find out who he is and why he can only remember wisps of images from his past, Mac joins a vampire and a druid in a daring kidnap rescue.

This is a fast paced action packed story with much fighting and talk of weaponry. The narrative flows smoothly as Mac causes chaos with his often outrageous behaviour towards others in the paranormal world.  I liked Mac and his action hero image. Some of the names of weapons that he used and other references to comic book heroes tended to go over my head, but generally I enjoyed this book.

My name is Mac Brennan and that’s the only thing I can remember about myself. Not why I woke up in a dumpster. Not why my right arm is as black as pitch and covered in glowing red tattoos, and certainly not why a vicious death cult is after me.

Actually, that last part isn’t true. I know why the death cult is after me. It’s because I saved that damned girl from them. I didn’t know who she was at the time, but I’d have done it anyway. I just don’t like it when girls get beat up, call me old fashioned.

Still, I can tell she’s hiding something behind those devilish eyes, and if I want to find out what it is, I’ll have to help her.

My name is Mac Brennan. I have no memory, and I’m a werewolf-hunting, hellfire-flinging version of Faust himself. 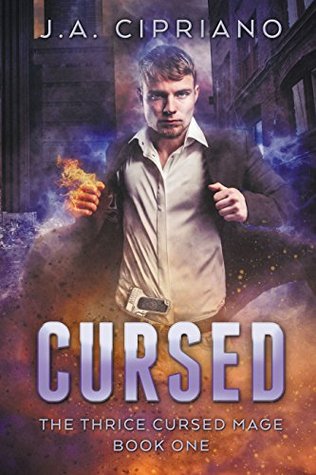 One thought on “Rosie’s #Bookreview of #UrbanFantasy CURSED by J.A Cipriano”