The Unadjusteds by Marisa Noelle

The Unadjusters is a young adult dystopian novel.

Silver Melody lives in a world where people are genetically altered with enhanced skills or abilities. Silver accepts her school acquaintances who might have wings or bulked muscles, or who have incredible speed.

The modifications arrive via the ingestion of nanite pills, originally made to cure diseases like cancer until greed, power and money influenced the direction of their development. Now around eighty per cent of the population have an altered DNA.

Although Silver’s parents helped create the nanites, Silver is against them because she has seen some horrific deaths from people taking the pills . She’s not alone; her mother was imprisoned after speaking out against the newer genetic changes.  When the President declares that everyone must take the pills, Silver flees her home and joins a group of renegades. As the world spirals into nanite-related chaos, Silver’s hopes lie with her still imprisoned parents who might be able to help reverse the genetic alterations.

I’ve read other books in this genre where people choose to alter the way they look, so I was interested to see where the author took this storyline. I liked the array of skills and abilities that were introduced. The story was fast paced with plenty of action and lots of characters. At times I felt there were too many characters as it became hard to picture them all. I enjoyed some of their background stories but I thought the sheer number of characters meant that the author missed out on making the main characters fully rounded and really memorable.

My biggest disappointment was that too often there was a lack of explanation or believable narrative. For instance, teenage characters might know a detail or were assigned actions that made me question the plausibility of the plot. I understand that much of this book is fantasy, but it still needs to be believable within the fiction.

Overall, a promising storyline, but it needed more attention to the details for it to work for me.

Sixteen-year-old Silver Melody lives in a world where 80% of the population has modified their DNA. Known as the altereds, those people now possess enhancements like wings, tails, and increased strength or intelligence. Although Silver’s parents created the nanite pill used to deliver these genetic modifications, Silver is proud of her unadjusted state.

However, when the president declares all unadjusteds must take a nanite, Silver has no choice but to flee the city with her father and some friends to prevent the extinction of the unadjusteds.

With Silver’s mother in prison for treason, Silver’s father is the unadjusteds’ only hope at finding a cure. But time is running out as Silver’s father is captured by the president’s almost immortal army. Vicious hellhounds are on Silver’s trail, and her only chance to recover her father involves teaming up with a new group of unlikely friends before all humanity is lost. 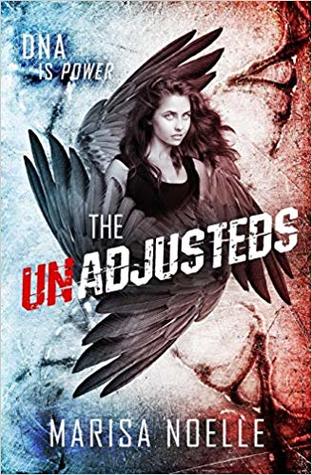