An Echo of Scandal by Laura Madeleine

An Echo Of Scandal is a dual time novel set mainly in Tangier.

It is 1978 and Sam is a destitute American who has been drifting through Western Europe and is now in Tangier. He plays at writing but he cannot find his muse, until he buys an old writing case. It leads him on a colourful journey through Tangier, both past and present as the reader is beguiled by the mysticism of the city that is a gateway between continents.

The second story, from 1928, begins in Spain. Ale is an orphan who lives in a brothel where she is taught how to make wonderful dishes from meagre ingredients. When she is accused of murder, though, no one helps her and she is forced to run away. Disguising herself as a man, to make travelling safer, she makes her way to Tangier, a multinational city, in the hope of re-inventing her life.

I really enjoyed the clear images of the people and the settings in this book. I could feel the heat, smell the food and see the bright colours in Tangier. Both stories drew me in to the plight of the characters and I liked how the two stories came together. The pace suited the lifestyle as Sam teased out Ale’s story with all its twists and turns, while I thought the ending left just enough questions which kept me thinking about it for several days.

Overall a good atmospheric mystery, especially for anyone with an interest in this era or in Tangier.

In the dead of night, with blood on her hands, she made her escape.

Accused of murder, Alejandra flees her home, escaping to the southern edge of Spain, where she faces a life of poverty and destitution.

Seduced by the power of the rich and the anonymity that waits across the water in Tangier, Ale makes a bid for a new start. But it will come at a cost: a life of deception. Because Ale’s new friends want to know what she is running from, they want to know who she is and whether they can trust her.

Fifty years later, a young American writer wanders the streets of Tangier, searching for inspiration. When he stumbles across a trace of Ale’s life, he finds himself tangled in a story of scandal, love and danger that has not yet reached its end. 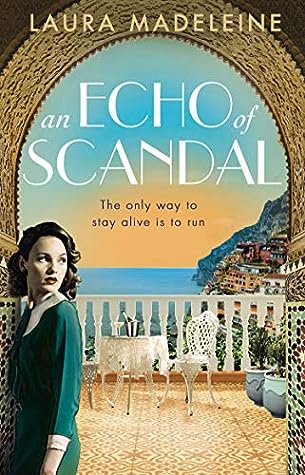 Book #1 of a #Ya #Fantasy series. Rosie’s #Bookreview of THE HIDDEN KING by E. G. Radcliff. The Hidden King is a young adult fantasy and book one of a series. It begins on the streets of a city called The Maze where poverty and danger thrive. A tragedy occurs for a teenage boy called Áed, who takes his ward, a young boy called Ronan, and journeys to the forbidden White City where he hopes they can live a better life. The White City is the opposite of The Maze, where its citizens live comfortably and have plenty to eat. However, it is overseen by a mad king, and any Maze inhabitants caught trespassing will be punished. When Áed is captured he’s taken to the dungeons and tortured, and has just one chance of survival. This story has a rags to riches theme and made me think a little of Oliver Twist. The world building worked well and I was able to imagine most of the settings. See here for full review https://wp.me/p2Eu3u-fjv #therosieamber #bookoftheday #reviewoftheday #bookreviewoftheday #instadaily #instabook #IndieAuthor #YoungAdultBooks #gifted
Have You Got The Right Key? Love my new key rack. #harrypottergifts #harrypottergift #iloveharrypotter⚡️ #harrypottergiftideas #harrypotterspells
A variation on Jane Austen’s classic tale. Olga reviews 1932: Pride And Prejudice Revisited by Karen M. Cox for Rosie’s #Bookreview Team #RBRT The story is narrated in the third person mostly from Elizabeth’s point of view, but also at times we see William Darcy’s viewpoint, and we get a much better understanding of how the feelings between them, especially when it comes to Elizabeth, develop. I think the historical period works very well to explain the changed circumstances for the Bennet family, who until then had lived a comfortable life in Chicago, but due to the Depression find themselves in a tight spot when Dr Bennet loses his teaching position at the university and is unable to find a job that will feed the seven mouths under his charge. The whole family gets uprooted to a small farm in rural Kentucky, and the rather desperate circumstances have a deep effect on Elizabeth’s ideas and decisions. Do not worry, there are pride and prejudices aplenty, but there are major changes in respect of the original novel, although I’ll keep my mouth shut so you can discover them yourselves if you are a fan, or enjoy this version without spoilers if you haven’t read P&P before. See here for full review https://wp.me/p2Eu3u-feR @karenmcox1932 #Gifted #FanFiction #JaneAusten #JaneAustenFanFiction #PrideAndPrejudice #StoriesSetDuringTheDepression #BooksSetInKentucky #TheBennetFamily #therosieamber
4 stars Break The Fall is a young adult contemporary sports-themed story based around a fictional American women’s Olympic gymnastics team. Audrey Lee has just been chosen as one of America’s team for the 2020 Tokyo Games. The next few weeks will be full of more hard training and intense pressure to fulfil her dream of becoming one of the best gymnasts in the world. Just as the team arrive at their training camp, though their chief coach is arrested and all their plans start to collapse. Now the team are fighting for survival as well as their places on the medal podiums. Gymnastics is a popular Olympic sport and the dreams of so many rest on just a few final performance minutes. I really enjoyed this story, which felt very real, both the reasons for the coach's arrest and the pressures felt by the girls. The build-up to the ending was emotional to read and I could understand how much it all meant to each one of the girls in the story. An ideal book for followers of gymnastics, but it should be noted that the book does contain some sensitive issues which include child abuse. Blog post here https://wp.me/p2Eu3u-fda @jennifercarolyn @penguinteen #BreakTheFall #JenniferIacopelli #Tokyo2020 #Gymnastics #OlympicGymnastics #WomensGymnastics #AmericanGymnastics #BooksAboutGymnastics #BooksAboutGymnasts #SportsThemedBooks #SportsBooks #SportsFiction #BookReview #WeLoveGymnastics #AmazonVine #ILoveGymnastics #gymnasticsislife #gymnasticstraining #Gymnasticsshoutouts #RosiesBookReviews #TheRosieAmber #Gifted
Recently I received a packet of Nül Gluten Free Jammie Cream biscuits to review. Here’s what I thought of them; I am not gluten or lactose intolerant but I was quite intrigued to try these jammie cream biscuits which are free from gluten, lactose and palm oil. Made from rice flour the two crunchy shortbread biscuits sandwiching the cream and jam are quite crumbly and slightly on the dry side but the tasty raspberry vanilla cream inside with the dollop of raspberry jam certainly compensates for the dryness of the biscuit. The biscuits are a little on the small side but are perfect with a nice cup of tea and although the shortbread is quite dry, the biscuits are very moreish and once you have opened the packet they won't last long! #gifted #amazon #amazonvine #vegan #biscuits #glutenfree #veganbiscuits #jammydodger #therosieamber #bookreviewer #Nül
A book that I wanted to love, but it didn’t grab me as much as I had hoped. Little Eden is a spirituality story set in a fictional village within London. The year is 2012, and it is believed by some that the Earth and its inhabitants are about to undergo significant changes. Little Eden is a community set up by a trust, and many of those living within its walls have special connections to mysticism. The story opens with a funeral and then an incident involving a breakaway group who want to sell Little Eden and use the proceeds of the sale for personal gain. Focusing on the inhabitants of Little Eden, the author attempts to show the changes, particularly spiritual ones, needed to help the planet. See here for full review https://wp.me/p2Eu3u-fh1 #Instabook #instadaily #bookreview #spiritualbooks #LittleEden #therosieamber #bookssetinLondon #SavingThePlanet #Booksaboutsavingtheplanet #spiritualchanges #spiritualmessages #compassion #gifted