Terry has been reading Intrigue & Infamy by Carol J Hedges

In a Nutshell:  Mid-Victorian murder mystery, set in London.  Book 7 of a series of stand-alones.

Loved it, loved it.  When I got to 80% I found myself slowing down because I didn’t want to read it too quickly.  In this 7th book of the series, racism rears its ugly head, showing that it is far from being just a 20th and 21st century problem.  Stride and Cully must deal with a series of arson attacks on businesses, and the brutal murder of an old Italian man.

Elsewhere, socialite Juliana Silverton is thoroughly enjoying the attention received since her engagement to hedonistic rich boy Henry Haddon, her delight marred only by a secret from the past … and the appearance of Henry’s younger half-brother’s new tutor.

This book is as expertly structured as the rest of the series, and includes similarly colourful characters and the ever-present chasm between rich and poor, so much a theme in all the books – and in certain areas of life nothing has changed; young aristocrats with powerful connections are able to get away with the most heinous of crimes, just as they always have been and are now.

Although illustrating society’s problems in the most deft way, Ms Hedges does not fall into the cliché of making all the privileged characters the ‘bad guys’; I was pleased to see a happy outcome for one, in particular.  I guessed the perpetrators of the crimes quite early on, but this didn’t matter a jot; the joy of reading these books is the writing itself, the vivid pictures of 1860s London, and the slow unfolding of sub-plots.

I can’t help but think of what star rating I will give a book while I am reading it, and this was a solid 5* all the way through, but what earned it my extra ‘gold’ star was the end twist that I never saw coming.  It was beautifully executed, and made me smile as I realised how other aspects were explained by it.

If you haven’t read any of these books, I recommend you start now – and I hope this is not the end of the series….

It is 1866, the end of a long hot summer in Victorian London, and the inhabitants are seething with discontent. Much of it is aimed at the foreign population living in the city. So when a well-reputed Jewish tailoring business is set aflame, and the body of the owner is discovered inside, Detective Inspector Lachlan Grieg suspects a link to various other attacks being carried out across the city, and to a vicious letter campaign being conducted in the newspapers.

Can he discover who is behind the attacks before more people perish?

Elsewhere, Giovanni Bellini arrives in England to tutor the youngest son of Sir Nicholas Haddon, ex-MP and City financier. But what are Bellini’s links to a dangerous Italian radical living in secret exile in London, and to beautiful Juliana Silverton, engaged to Harry Haddon, the heir to the family fortune?

Romance and racism, murder and mishap share centre stage in this seventh exciting book in the Victorian Detectives series. 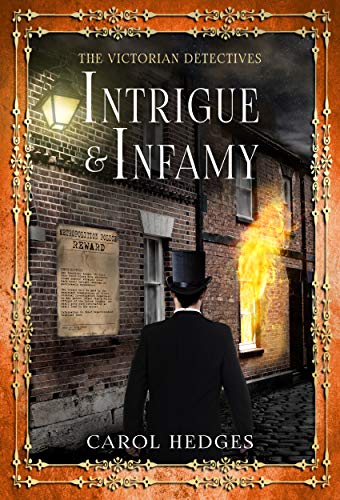