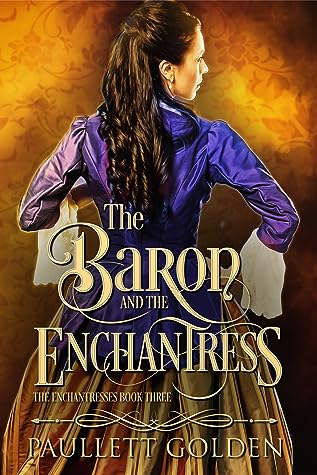 The Baron and The Enchantress by Paullett Golden

This book can be read as a stand-alone, but I would recommend reading the series in order as in each new book you get to reunite with characters from previous ones.

This is the story of Lilith, a parish midwife and now a teacher at the orphanage that she was raised in. A year ago her brother, who thought she had died, came back into her life. Lilith was shocked to discover she was the long lost sister of Sebastian, the Earl of Roddam. Although happy to know she has a brother, Lilith refuses to leave her humble home. She vows that the carefree and empty life of a society lady is not for her.

However, during her time as midwife for her brother’s wife, Lilith meets Walter (Lord Collingwood), who has an estate in Devon. He and his mother represent the aristocracy that Lilith despises, but as they get to know each other she finds them both quite different from her expectations.

This is a story filled with doubts and insecurities, family, bloodlines and people’s fear of imperfection. I liked this twist on the rags-to-riches theme. Lilith’s struggles to find a way she could be comfortable as Lady Lilith were believable and I sympathised with her when she struggled to find a place where she felt she belonged. Walter too, had personal issues he needed to work through, even though he thought his love alone would be enough for Lilith.

Some of my favourite parts were when Lilith chose to learn to be a lady and how her new household helped her transformation.

Overall a good edition to the series and I shall look forward to reading the next book.

Lilith Chambers’ quiet life as a parish midwife shatters when the brother thought responsible for her death discovers she’s alive and well. Having been raised in an orphanage, she has few memories of her real parentage or the circumstances of her disappearance from the life she ought to have. As she reorients herself in a new life, she meets the one man she can’t have.

Walter Hobbs, Baron Collingwood, is struggling to assume the mantle of his untimely inheritance. Then he meets Lilith Chambers, the long-lost daughter of the 15th Earl of Roddam. He is struck by love at first sight. She is everything he could ever want in a woman, except for two inconveniences: she is illegitimate, and she wants nothing to do with him.

This is the love story of Walter and Lilith as they discover themselves through each other.