Olga has been reading Human Flesh by Nick Clausen 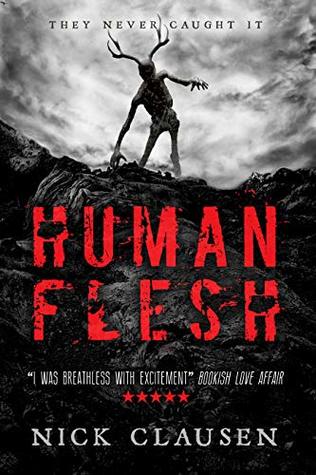 I am a fan of horror, had read great reviews of one of Clausen’s collections of short stories, and I liked the sound of this one (and the cover is pretty impressive as well).

This is a short horror novella that works at many levels. Its topic is fairly well known (especially to lovers of the genre, and as a psychiatrist I’m also aware of its diagnostic implications, although I won’t elaborate on that), but despite its short length, the author manages to capture the atmosphere of the story, the cold, the darkness, the weirdness and the horror (more psychological than graphic, although it has its moments) in the few pages available, using also a pretty interesting way of telling the story. As mentioned in the description, rather than a standard narration, we have what appears to be a compilation of documents pertaining to a mysterious case, and this will appeal as well to lovers of crime stories and police procedural novels (although if they are sticklers for details, they might be bothered by the supernatural aspects and by some bits and pieces of information that don’t seem to quite fit in, but…). This peculiar way of narrating the story forces readers to do some of the work and fill in the blanks, and that is always a good strategy when it comes to horror (our imagination can come up with pretty scary things, as we all know). It also gives readers a variety of perspectives and some background that would have been trickier to include in a story of this length otherwise. Does it make it more difficult to identify with any of the characters? I didn’t find that to be the case. The story (or the evidence) starts mildly enough. An accident means that a family cannot go skiing as usual for their winter holidays, and the father decides to send his two children (and older girl, Otha, and a younger boy, Hugh) to stay with their grandfather, Fred, in Maine.  Things start getting weird from the beginning, and Otha (who has a successful blog, and whose entries create the backbone of the story, making her the main narrator and the most sympathetic and easier to identify with for readers) is not the only one who worries about her grandfather, as some of the neighbours have also been wondering about the old man’s behaviour. The secret behind their grandmother’s death becomes an important part of the story and there are eerie moments aplenty to come.

The novella manages to combine well not only some legends and traditional Native-American stories with more modern concepts like PTSD, survivor’s guilt, but also the underlying current of grief that has come to dominate the life of the children’s grandfather. It also emphasises how much we have come to rely on technology and creature comforts that give us a false sense of security and cannot protect us again extreme natural conditions and disasters. Because of the age of the main protagonist, there is also a YA feel to the story with elements of the coming-of-age genre —even a possible love interest— and I’ve seen it listed under such category, but those aspects don’t overwhelm the rest of the story, and I don’t think they would reduce the enjoyment of readers who usually avoid that genre.

Is it scary? Well, that is always a personal call. As I said, there are some chilling scenes, but the novella is not too graphic (it relies heavily on what the characters might or might not have seen or heard, and also on our own capacity for autosuggestion and suspension of disbelief). There is something about the topic, which combines a strong moral taboo with plenty of true stories going back hundreds of years, which makes it a very likely scenario and something anybody reading it cannot help what reflect upon. We might all reassure ourselves that we wouldn’t do something like that, no matter how dire the conditions, but how confident are we? For me, that is the scariest part of the story.

In sum, this is a well-written and fairly scary story, with the emphasis on atmosphere and psychological horror rather than on blood and gore (but there is some, I’m warning you), successfully combined with an interesting way of narrating a familiar story. As a straight mystery not all details tie in perfectly, but it’s a good introduction to a new voice (in English) in the horror genre. I’m sure it won’t be the last of Clausen’s stories I’ll read.

They never caught it

During the winter of 2017, a series of strange occurrences took place in a small town of northern Maine. A rational explanation for what happened has still not been presented. Now, for the first time, all the available written evidence is being released to the public from what is commonly know as the Freyston case.