Terry has been reading Severed Knot by Cryssa Bazos 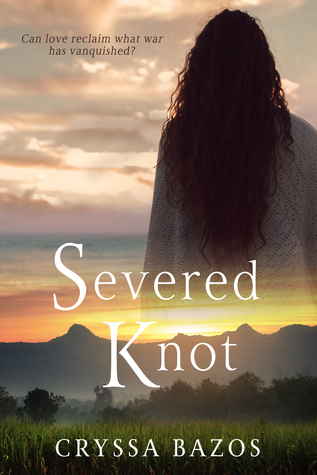 I enjoyed this book so much.  The basic story: Iain Johnstone is a Scottish soldier imprisoned by Cromwell’s men after persuading many of his contemporaries to go south and fight for Charles II.  Mairead O’Conneil is a young woman staying at her uncle’s house in rural Eire for ‘safety’ while her father and brothers fight the Parlimentarians ~ but then the soliders come… and both Iain and Mairead find themselves on a slave ship bound for Barbados.

I hadn’t read this relatively new writer before, but I’m glad I’ve discovered her; she’s seriously talented.  The book is professionally presented, which I appreciated so much; it is clear that the research has been both meticulous and extensive, but at no time was I overly aware of it; I never felt that I was reading her research notes, as can so often be the case.  The atmosphere of the prisons, the slave ships and the Barbadian plantations, with all their horrors, is colourfully illustrated, and her characterisation and dialogue kept me engrossed, throughout.  I liked, too, that it gave me a view of how the English troubles spread far and wide.  Aside from all this, it’s a terrific adventure story.

Within the plot is a romantic thread, a background shadow in the first half of the book that steps closer to centre stage as it goes on.  The theme is the romantic novel standard of two people taking against each other on sight then being extraordinarily rude to each other whenever they cross paths before finally admitting their passion, which can work well if cleverly written, and this was.

Sadly, though, because of the descriptions of Mairead (tiny, skinny, frizzy-haired, plain, sprite, ‘Mouse’) I could only ever picture her as a sort of meek teenage imp, rather than a woman likely to inflame the passions of the Sean Bean-as-Sharpe/Boromir-like Iain, so it fell a little flat for me.  This sort of opinion is only ever a personal viewpoint, though, and I must bear in mind that I not a fan of romantic fiction, generally; I was glad that other non-love stuff made up the main body of the book.

Despite these reservations, I am still rounding the 4.5* up to 5* on Amazon in the interests of objective reviewing, because it really is an exceptionally good novel, and I will definitely place her on my mental ‘read more’ list.

Barbados 1652. In the aftermath of the English Civil War, the vanquished are uprooted and scattered to the ends of the earth.

When marauding English soldiers descend on Mairead O’Coneill’s family farm, she is sold into indentured servitude. After surviving a harrowing voyage, the young Irish woman is auctioned off to a Barbados sugar plantation where she is thrust into a hostile world of depravation and heartbreak. Though stripped of her freedom, Mairead refuses to surrender her dignity.

Scottish prisoner of war Iain Johnstone has descended into hell. Under a blazing sun thousands of miles from home, he endures forced indentured labour in the unforgiving cane fields. As Iain plots his escape to save his men, his loyalties are tested by his yearning for Mairead and his desire to protect her.

With their future stolen, Mairead and Iain discover passion and freedom in each other’s arms. Until one fateful night, a dramatic chain of events turns them into fugitives.