Noelle has been reading Arthur: Shadow Of A God by Richard Denham 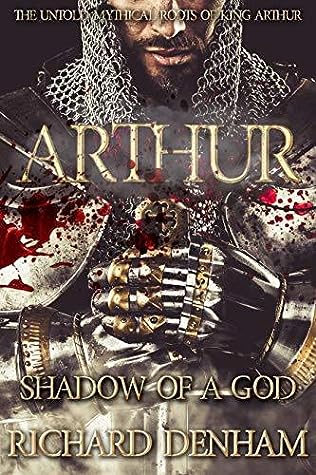 I have read all of Richard Denham’s Britannia Series and enjoyed them immensely – they are fascinating historical fiction with attention to true detail. Arthur: Shadow of a God is quite different. Here we have an in-depth analysis of the possible reality of a British king called Arthur and the possible truth that he was not a man at all but became a god, based on Celtic tales and Druidic traditions.

A historical fiction novel this is not! What it is: a compilation of research done by the author in an attempt to define who Arthur really is, based on research of ancient texts and stories. Nevertheless, this is not a dry book. Its contents are fascinating!

Like most people, I have been drawn to stories of Arthur since childhood, and I always believed he was real. The author digs for his reality in the history of Britain before, during and after the Roman occupation based on previous scholarly consensus that Arthur was a Romano-British warlord. That worked for me until it became obvious from this book that much of the research on which this idea was based is guesswork – guesswork compounded by a lack of archeological information and fact-based sources from what would have been his time. The magical swords, wizards, dragons and faeries interweaving Arthur’s story added to my doubt. Do you see Arthur as a knight in shining armor? Such men, mounted on destriers and armed with swords and lances are the stuff of medieval times!

What was evident to the author, based on many sources and his own scholarship, is that Arthur is a god in the appearance of a king, drawn from Celtic folklore and Druidic tales handed down orally from generation to generation. Legend and myth, human imagination and perhaps a longing for such a hero combined to produce Arthur.

If you are as fascinated by King Arthur as I have always been, then you need to read this book. It is rich in detail and peels away, like the layers of an onion, all of the mystery surrounding him to get to the truth. It is your choice to believe or not!

King Arthur has fascinated the Western world for over a thousand years and yet we still know nothing more about him now than we did then. Layer upon layer of heroics and exploits has been piled upon him to the point where history, legend and myth have become hopelessly entangled.

In recent years, there has been a sort of scholarly consensus that ‘the once and future king’ was clearly some sort of Romano-British warlord, heroically stemming the tide of wave after wave of Saxon invaders after the end of Roman rule. But surprisingly, and no matter how much we enjoy this narrative, there is actually next-to-nothing solid to support this theory except the wishful thinking of understandably bitter contemporaries. The sources and scholarship used to support the ‘real Arthur’ are as much tentative guesswork and pushing ‘evidence’ to the extreme to fit in with this version as anything involving magic swords, wizards and dragons. Even Archaeology remains silent. Arthur is, and always has been, the square peg that refuses to fit neatly into the historians round hole.

Arthur: Shadow of a God gives a fascinating overview of Britain’s lost hero and casts a light over an often-overlooked and somewhat inconvenient truth; Arthur was almost certainly not a man at all, but a god. He is linked inextricably to the world of Celtic folklore and Druidic traditions. Whereas tyrants like Nero and Caligula were men who fancied themselves gods; is it not possible that Arthur was a god we have turned into a man? Perhaps then there is a truth here. Arthur, ‘The King under the Mountain’; sleeping until his return will never return, after all, because he doesn’t need to. Arthur the god never left in the first place and remains as popular today as he ever was. His legend echoes in stories, films and games that are every bit as imaginative and fanciful as that which the minds of talented bards such as Taliesin and Aneirin came up with when the mists of the ‘dark ages’ still swirled over Britain – and perhaps that is a good thing after all, most at home in the imaginations of children and adults alike – being the Arthur his believers want him to be.