Lilyn has been reading Daughter of Kali: Unholy Alliance by Shiulie Ghosh 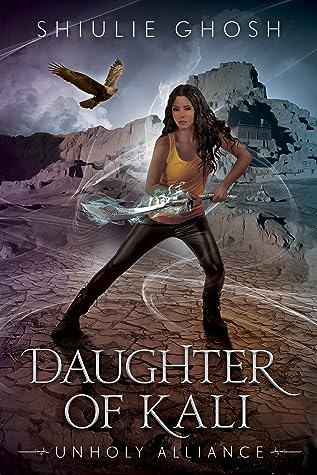 I was asked to read Unholy Alliance after my positive review of the first book Daughter of Kali: Awakening. I would have had it done a few months ago, but it fell into my black hole of an e-mail and I just recently found it again.

Unholy Alliance is a good follow-up to Awakening. It smoothly carries on the story thread left at the end of the first book, while upping the ante as any good sequel should do. I can legit say that I did not expect things to play out at the very end quite the way they did, and now I’m curious to read the third book.

I feel like I was more irritated by the YA elements in this novel than I was in the previous one. However, as this is indeed a YA novel, I’m not going to harp on them. I’ll just say the love triangle was more predominant and the hormones got a bit much at times. In the intended age range, it’s stuff that I’m sure will probably give (most) readers a huge happy.

There are many, many dark times in this book. Scenes of horror upon horror. Ghosh makes the right decision in trying to keep things light with periodic injections of levity. Sometimes she succeeds wildly and I found myself snickering while reading. Other times it came off as trying a bit too hard and I just sighed and kept reading.

I felt like the Harry Potter nods were strong in this one. From the pesky little flying creatures to the colors of the spells to the strongly accented man with a love for a big, dangerous creature, it was hard for me to not see them. To be honest, it took away from my enjoyment of the book a bit, because it made it less of its own thing and more something I was too familiar with. (Were they actually Harry Potter influenced on her end, or just how I see them because I was a big fan of Harry Potter? The world shall never know.)

The action-monger in me was very happy with the sheer amount of ass-kicking that happens in this book. The dialogue wasn’t fantastic, but it was never cringe-worthy either. I am glad the technomagic had more play in this book, but I would love, love, love to see a short story or something from Em’s point of view where she’s completely geeking out and creating, instead of just seeing what it can do and a scene in her mad scientist lab.

As things built to the climax, I was fully invested. The end wrapped up this story arc nicely, but now I need to see how a couple characters are going to manage to work things out. I hope that Ghosh makes the third book into an amazing powerhouse of a third novel and shows readers the potential that we see shining so strongly in the other two books.

The time of prophecy is near.
Sixteen year old Kaz is now a trained Warrior for the secret society known as the Guild. Just like her mother before her. But her mother is dying, and only demonic power can save her. Going against everything the Guild stands for, Kaz must form an uneasy alliance with a Named One.
She also has a goddess on her case. Kali wants her to fulfil a prophecy – only Kaz isn’t quite sure what that is. Her own power, the bloodthirsty inner voice she calls the other, is getting stronger.
And as if that wasn’t enough, her emotions are torn between Darius, the Warrior in love with her best friend; and Jack, dark, brooding, and a bit irritating.
Kaz finds herself navigating a dangerous path at great cost. The lives of those she loves are in danger, and her only hope of saving them is to solve the mystery of the prophecy even if it destroys her.