Noelle has been reading Mahoney by Andrew Joyce 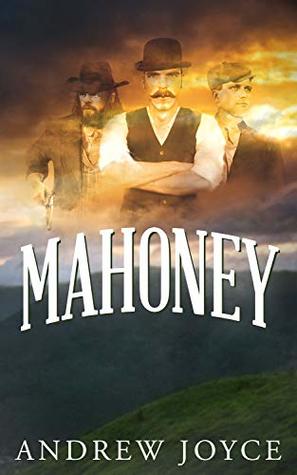 I am a big fan of Andrew Joyce’s books, and I think this may be the best one yet. Perhaps it’s because the book is so entertaining, perhaps it’s because I’m part Irish through the migration during an Gorta Mór (the Irish potato famine or great hunger), or perhaps because I am a sucker for history and family sagas – but probably all three.

Mahoney is the story of the family by that name and was written as a trilogy tied together by common ancestry. The reader is first introduced to Devin, who is the last of the Mahoneys, famine and sickness having taken everyone else in his family. He lies on the dirt floor of the single room in his small, dark home in Ireland, waiting to die. When given the opportunity to take a ship to America, which looms large in his mind as a place where he can grow rich, he takes it.

The author has done some incredible research for his book, as he has for all the previous ones. Devin’s voyage to Quebec in the crowded and disease-ridden hold of a ship is richly drawn in its sordid and dangerous details. The story of how Devin makes his way and his living in cities prejudiced against the Irish is intense and his letters as a soldier in the Civil War are heart-breaking.

The next Mahoney we meet is Dillon, son of Devin. His life is a tapestry of adventures, from working on the transcontinental railroad, to becoming a cowboy on a vast cattle ranch, to earning a reputation as a gunslinger in the Wild West, to earning a fortune as an oil wildcatter in California.

Finally there is David, the dissipated and spoiled son of Devin. The disappointment I initially felt with this character is gradually lifted with his foray into the South during the time of the Depression and the Klu Klux Klan.

All in all, an adventurous ride I could not put down. The writer’s strengths are in his ability to paint the history in succinct brush strokes, in the development of his characters, and most of all, in the dialogue. The story of Devin is perhaps the strongest of the three, as this characters has the most to overcome and does it mainly on his own. I wanted to stay with his story, but events of the time interfered. Dillon and David have somewhat miraculous help at critical times (who’s not to say they wouldn’t?) to move their story forward.

Nevertheless, Andrew Joyce gives us a rich and colorful picture of America, with all its faults, from the Irish migration to the Deep South of the 1930s, covering a lot of history with an engrossing story.

I highly recommend Mahoney if you want a great read.

In this compelling, richly researched novel, author Andrew Joyce tells a story of determination and grit as the Mahoney clan fights to gain a foothold in America. From the first page to the last, fans of Edward Rutherfurd and W. Michael Gear will enjoy this riveting, historically accurate tale of adventure, endurance, and hope.

In the second year of an Gorta Mhór—the Great Famine—nineteen-year-old Devin Mahoney lies on the dirt floor of his small, dark cabin. He has not eaten in five days. His only hope of survival is to get to America, the land of milk and honey. After surviving disease and storms at sea that decimate crew and passengers alike, Devin’s ship limps into New York Harbor three days before Christmas, 1849. Thus starts an epic journey that will take him and his descendants through one hundred and fourteen years of American history, including the Civil War, the Wild West, and the Great Depression.