Terry has been reading The Bledbrooke Works by John F Leonard 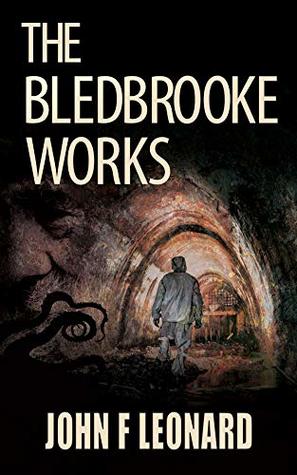 I liked this story a lot—I’ve read an earlier novel and a shorter story by John F Leonard, and his writing has come on in leaps and bounds; this is a different class.

‘Back before the Domesday Book, the little spot known has Bledbrooke had started out smaller than small…During the Middle Ages, it shuddered into a village while no one was looking’

Bledbrooke is a strange town, in which electricity often fails and phone reception is almost non-existent.  Donald Hobdike is the Manager of Works; on the day in which the story takes place he must go down to the old, abandoned sewage works to fix a problem.  A young ex-con, Mikey, is assigned to help him.  And down they go…

The characterisation of the two men was a joy to read, with astute observations about each others’ generation, and their own lives; there are some highly descriptive turns of phrase that I so appreciated.  The chapters alternate been the points of view of Hobdike and Mikey—and another being; the one that lurks beneath.  It was this that took it to another level for me, as the presence beneath Bledbrooke contemplates its existence over millennia, and the nature of mankind.

‘The periods of slumber grew progressively shorter as it acclimatised and located fresh supplies of food.  Millennia or intertia became centuries of torpor and eventually decades of inactivitiy.  With each waking, evolution had shimmied and leapt down new paths, throwing up bewilderingly brittle lifeforms that lasted a celestial instant and were gone.’

It’s darker than dark, sinister and highly readable. Worth 99p of anyone’s money, or it’s available on Kindle Unlimited, too.

Autumn photos. Chestnuts, Inkcap and Common Bonnet
'The perils and exploitation of refugees'. Lynne reviews The Bodies That Move by Bunye Ngene, for Rosie's #Bookreview Team #RBRT
Today's toadstool /mushroom photo from yesterday's woodland ramble is this pretty little purple number. It may be an Amethyst Deceiver (mushroom) but can easily be confused with the Lilac Fibrecap and Lilac Bonnet which are both poisonous.
Have been out spotting toadstools, this one looks like it has tiny spikes. It may be a puff ball toadstool.
'I enjoyed the way that the author moved the story away from ball rooms and high society often seen in this genre'
I need names for these two lovely Gonks that have just moved in with me. Give me your best suggestions. Bought these from @memorieshomeandgifts #gonks #swedishgonks #giftideas #luckygonks
#lifequotes from my @_ruby_ashley_ cards
View from the bridge of the river Leach near St. Peter and St. Paul church in #northleach #cotswolds taken a couple of weeks ago. A Saxon town famous for the wool trade in the middle ages. The river runs through the mill.
Love Island?