Robbie has been reading Junior Paranormal Investigators: The Haunting of Room 909 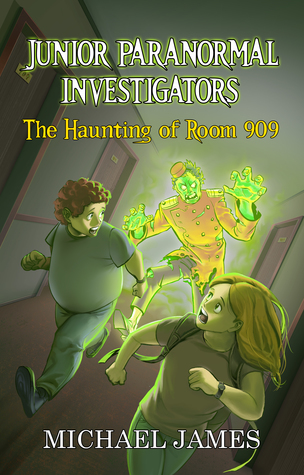 Hanna and Ben live an unusual life. Their father became a paranormal investigator when their mother disappeared, after a series of paranormal events near their home, three years previously. Hanna and Ben are eager to assist their father with his latest case that involves a haunting at a well-know hotel. Percy, their father, is not keen to let them become involved as he thinks paranormal investigating is to dangerous for children. It seems, however, that there are other forces at play that are quite determined to get the children onto the ninth floor, which is the centre of the mysterious occurrences. The children have no choice in the matter when the elevator takes them directly to the 9th floor, which they have been forbidden to enter, despite the elevator button supposedly having been disconnected.

Hanna is sensitive to the mystical forces around her and has an out of body experience when she can see the ghosts that are haunting the 9th floor. Two of them seem desperate for help and Hanna is determined to assist them with escaping from a murderous previous employee, if she can. Ben is delighted to have an opportunity to investigate a paranormal case and is happy to accompany her on an investigation of various parts of the hotel.

I enjoyed this book and thought children aged 9 to 12 would find it entertaining. It brought the film, Ghostbusters, to my mind as it has the same mixture of scary with a sprinkling of subtle humour and some interesting equipment and events.

Summer is usually a time of fun and games for most children, but Hanna and Ben Littleton are not your average eleven and twelve-year-old. Their father is Percy Littleton, a famous paranormal investigator, and this summer they are traveling to different locations to investigate unexplained phenomenons. Things are rather boring until they stop at Castleridge Hotel. The hotel is reportedly haunted by more than one ghostly presence and the manager has asked Percy for help.

Though warned by their father not to meddle in his investigation, the brother and sister are convinced they can prove their worth as true investigators. Their eagerness soon turns to terror when Hanna begins having visions about a certain former employee of the hotel, the elevator takes them to the ninth floor on its own, and ghosts interact with them. The building seems to have a mind of its own as Hanna and Ben are forced to figure out what really happened one hundred years ago at Castleridge Hotel, before the spirits trapped inside decide to make them permanent residents.