Olga has been reading Will Rise From Ashes by Jean M. Grant 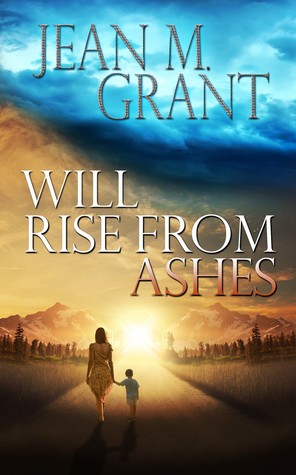 This is an ambitious novel. The author has tried to combine a complex set of characters with a gripping plot. AJ, the protagonist of the novel, is a woman in crisis, dealing with grief, having to bring-up two young boys on her own (neither of them the ideal well-behaved easy-child that everybody dreams of, but I suspect doesn’t exist in real life. The oldest, Will, in the autistic spectrum, and Finn, whom we hear plenty about but don’t get to know as well first-hand, sounds pretty overactive and his behaviour can be also challenging at times), suffering from anxiety (and perhaps other mental health difficulties), and experiencing an almost totally crippling fear of driving. We hear her side of the story, narrated in the first person. Being a professional writer, she makes for a compelling narrator, and, although not being a mother and not sharing in her extreme circumstances I do not have much in common with her, I felt the author managed to convey well the doubts, anxieties, hesitations, guilt, and the difficulties the character experienced accepting her situation, moving through the stages of grief, and eventually giving herself (and others) a chance. Her son, Will, loves all things volcano, weather, and geology, and the author offers us his perspective of the situation (this time in the third person) that serves two purposes: on the one hand, we get a more objective outsider’s perspective of how things are (because being inside of AJ’s head all the time means her suspiciousness and paranoia are not always easy to separate from how bad things really are), and we also get an understanding of how things look like and feel for a child with high-functioning autism (although there is less emphasis on that aspect than in other books I’ve read, unsurprising if we take into consideration the many other things going on).

We are later introduced to Reid, who is a combination of knight in shining armour, love interest, and also a man haunted by issues from the past (ex-military, talks about PTSD as if he was very knowledgeable about it, and his behaviour is at times mysterious, to say the least). Although AJ is suspicious about him and it takes her a long time to give him a chance, do not worry, the novel also contains romance and an opportunity for redemption. (I don’t want to give any spoilers away, but the description is quite clear in some aspects, and this is not a mystery novel, even if there are some details about the characters that are only revealed late in the story, and eventually help us understand people and events much better).

The plot keeps the story ticking, ensuring that people who might find the self-questioning and doubts AJ has to confront a bit uncomfortable (or worry that they might slow the story) have plenty to keep them turning the pages. A major disaster is the background of the story, which once AJ decides to go searching for her son, becomes the novel equivalent of a road movie. This is not a post-apocalyptic novel, but there is evidence of research and credible details of the likely scenario and consequences of such an event are interspersed through the narrative. Thanks to Will’s interest in volcanos we get first-hand information about that side of things, and as they approach the affected area, we get an almost physical sense of what it would be like to live the aftermath of a super volcano eruption. Apart from nature, the characters have to confront many other problems: technical difficulties, robberies, attempted assaults, road blocks, lack of supplies, poor telephone lines and a break-up in communication, no running water, no access to prescription medication… A woman with a driving-phobia having to drive across half the country is enough of a challenge, but her resolution keeps getting tested, and despite her reluctance to ask for or accept help, no matter how cautious and well-prepared she thought she was, she discovers that she needs a helping hand. Although the situation is harrowing and there is almost no rest or break from it (other than some dreams of the past AJ experiences, that provide us more background information and a better understanding of where she is coming from, her moments writing the diary, and the odd detour), this is not a book that gets into the gore of the destruction in detail, and, if anything, we are so focused on the here-and-now of the story that the global picture (and the many lives lost) is somewhat diluted.

The ending is satisfying and hopeful, in marked contrast to the difficulties and hindrances experienced during the trip, and in many ways the book can be seen as a metaphor for the process the main character must go through. AJ’s whole world has shattered around her, and she has been put to the test. She realises that she is stronger than she needs, that she can ask for help, and that she is ready to —slowly— move on.

As I mentioned, I did not identify with AJ, and I am not a big fan of romance (there is also a mild and not-too-graphic sex scene, but I thought I’d warn people just in case), but the book captures well the mental processes of the main character, who is a credible and complex woman trying to do her best in very difficult circumstances. The challenges of motherhood are also compellingly told (although I have no personal knowledge of the subject), and I am sure many readers will enjoy that aspect as well. If people are looking for other books focusing on the autism side-of-things, I’d recommend a couple of books as well: the well-known The Curious Incident of the Dog in the Night-Time by Mark Haddon, from an older boy’s perspective (and if you can catch the play, it’s well-worth watching), and Keith Stuart’s A Boy Made of Blocks where the father of a child with autism is the main character.

A tour-de-force that combines a gripping plot with strong and complex characters, and a hopeful message. Recommended for readers of women’s fiction.

Living is more than mere survival.

Young widow AJ Sinclair has persevered through much heartache. Has she met her match when the Yellowstone supervolcano erupts, leaving her separated from her youngest son and her brother? Tens of thousands are dead or missing in a swath of massive destruction. She and her nine-year-old autistic son, Will, embark on a risky road trip from Maine to the epicenter to find her family. She can’t lose another loved one.

Along the way, they meet Reid Gregory, who travels his own road to perdition looking for his sister. Drawn together by AJ’s fear of driving and Reid’s military and local expertise, their journey to Colorado is fraught with the chaotic aftermath of the eruption. AJ’s anxiety and faith in humanity are put to the test as she heals her past, accepts her family’s present, and embraces uncertainty as Will and Reid show her a world she had almost forgotten.