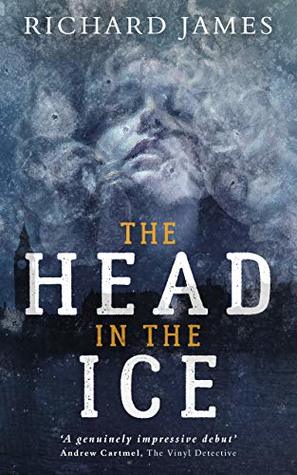 From the moment I read the description of this novel, a few weeks before its publication, I knew I’d end up reading it. I love mysteries, have been reading historical fiction in recent times and with my background in criminology, a mysterious murder set in the Victorian era ticked many boxes. To top it all, the main character, and the protagonist of the series, Inspector Bowman, had been in a lunatic asylum. As I’m also a psychiatrist and have read and enjoyed books looking back at the history of psychiatry, this was a further inducement, if I needed one. Of course, the title and the cover of the book worked in its favour.

I’ll try not to dwell too much on the story and the plot itself, to avoid spoilers, but I can tell you the book is a fine mystery that lived up to my expectations, and even surpassed them in many ways.

The style of the story and the way is told put me in mind of watching a movie (or a play, which I know is a genre the author is very familiar with, although here we have many more settings than in a standard play). The author uses an omniscient point of view, and that means that readers get to see scenes and events from a variety of characters’ perspectives (and not only the good guys either), and sometimes also from a neutral observer’s point of view (that works particularly well to set the scene and also to keep the mystery going, while at the same time offering readers some snippets of information that Bowman and his team do not have). That is an excellent method to avoid revealing too much while offering the readers great insights into the characters’ thoughts and motivations, but I know not everybody likes stories told this way, and I’d advise people to check a sample of the book to see if it is a good fit, in case of doubt. Personally, I did not find the way the story was told at all confusing, although due to the nature of the case and to the many characters, it is necessary to pay close attention and make sure not to miss any details. (Perhaps adding a cast of characters might help readers get their bearings quickly).

In some books that type of point of view might result in difficulty getting attached to any of the characters, but I did not think that was the case here. Although we get many points of view, the main one we follow is that of the Bowman, and because the inspector is the first character we meet, and in pretty difficult circumstances (he is a resident at a lunatic asylum just about to go in front of the board that must decide if he’s ready for his release), we quickly establish a connection with him. He is a sympathetic and intelligent character, who has suffered a personal tragedy that has resulted in mental health difficulties (nowadays, I’d say he would be diagnosed, most likely, with Post-traumatic Stress Disorder), and who tries hard to get on with his life, despite his anxiety, flashbacks, and the complex and emotionally challenging nature of his work. He is not the perfect and flawless here, but a human being with flaws and weaknesses. His flashbacks, the physical symptoms he experiences, and his fragile mental state are well drawn and are, for me, one of the strongest points of the book. I also enjoyed the depiction of the asylum and its therapies, far from the ones we often see and read about in popular media that seem right out of a horror movie. There are other characters to root for as well, although not quite as fleshed out as Bowman, and even some of the baddies are individualised enough for readers to get a fair idea of who they are.

The novel also succeeds at creating a picture of the London of the era, the atmosphere of the different neighbourhoods, the asylum, Scotland Yard, the underworld, without going overboard with descriptions and details or slowing the action. It is a compelling and historically accurate portrayal of a time, and one that goes beyond the anecdotal to dig deeper into some of the unsavoury aspects of the era.

The plot is gripping, and we visit upper-middle-class locations, pubs, sewers, cemeteries, bridges, a lunatic asylum, a ship, Bengal, and we get to learn about laudanum, poisons, laws, Victorian trade, weapons, the criminal underworld of the era (including murders, robberies, prostitution…), and although we learn enough information to get suspicious about the guilty party (or parties) fairly early on, there are quite a few twists and turns, strange goings on, and we don’t get to understand how it all fits together until close to the end (we might have our suspicions but…). There are some red herrings thrown in, and even a suggestion of the supernatural. All in all, the atmosphere, the characters, and the plot, work well to create a solid story, a great opening to a new series of Victorian mysteries, and one that allows us to examine the laws, mores and morality of the era.

If I had to take issue with anything, other than the point of view that I think works well but some readers might not feel comfortable with, I felt that, at times, some of the experiences, tics, and behaviours characters engage in (clearing one’s throat, blowing smoke into someone’s face, etc.) are repeated fairly often, and that put me in mind of stage directions or business that actors have to engage in to indicate certain traits of a character, which might not be as relevant or necessary when we can share in their thoughts directly. I did not find it distracting and, like some of the side stories, I felt they helped readers catch their breath and regroup, but those who prefer stripped down and action-led plots might feel they could be slimmed down.

In sum, this is a great story that I’d recommend to those who enjoy mysteries within a historical setting (Victorian in this case), with a complex story full of compelling characters and plenty of atmosphere. I look forward to the next adventure of Inspector Bowman, and I’m sure I won’t be the only one.

Who would send a madman to solve a murder?

Just released from a Lunatic Asylum, Inspector George Bowman is in no shape to lead an investigation, but the discovery of a severed head in the frozen waters of the River Thames sees him back in service at Scotland Yard. As he delves into the dark heart of the city in search of answers, the memory of the death of his wife threatens to derail his investigation and place his very sanity in peril.

Bowman must confront his demons and the part he played in her demise before he can solve the case; a case that leads him across Victorian London in pursuit of a killer.