Sandra has been reading Hide Not Seek by D.E. Haggerty 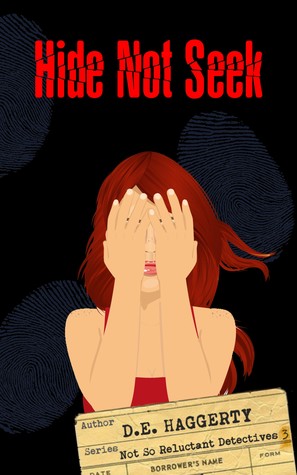 Hide Not Seek is the third volume in The Not So Reluctant Detectives series and completes the trilogy with Pru’s story.

Although she has not lived in Milwaukee for very long, Pru has formed a strong bond with Mel and Terri whose stories were told in the first two books. She thought she had left the past behind her, and when she starts getting threatening notes we finally find out what Pru has been hiding from the others, but she does not give up her secret until absolutely forced to.

There are lots of twists and turns and a great surprise ending. You can read this on its own, but it will make a lot more sense if you read the books in order. I really like the relationship between the three women and how they complement each other. Their escapades are not so wild in this book, with Owen and Ryder more aware of what is going on, but that is good as Mel’s more extreme behaviour is kept in check. As Pru is an English teacher, the chapters begin with cryptic quotes from poems and novels (they are listed at the end).

Hide Not Seek is an enjoyable resolution to the series, and I am looking forward to reading DE Haggerty’s next book.

I know who you really are.

Pru has a secret, which she has no plans to reveal – ever. But after a woman is murdered and all clues point to her, she has no choice but to disclose her true identity. When her revelations thwart the killer’s plan to frame Pru for murder, the killer begins stalking her. With each note he sends, he gets closer. The police are stumped. Pru wants to run away. She really, really wants to run, but Ajax has found the woman of his dreams and he’s not letting her go anywhere. He can be patient. In the meantime, he’ll protect her with his life. Pru isn’t feeling very patient, and her friends, Mel and Terri, are definitely not willing to wait until the police discover who the stalker is. The three friends take matters into their own hands and jump headfirst into the investigation.

Will Pru and her friends uncover her stalker before he turns his violence on Pru?