Terry has been reading Monkey Temple by Peter Gelfan 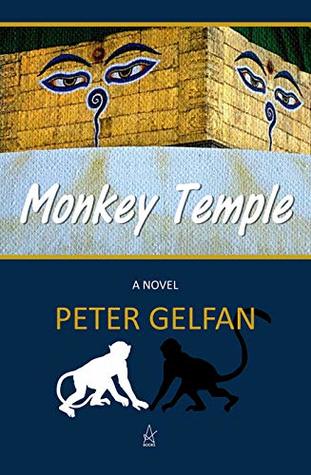 An unusual and entertaining book, mostly based around a short period during the twilight years of protagonist Jules, his wife, Ritz, and their mixed bunch of ageing hippie friends from the old days—mostly the complicated and high-maintenance Ralston, who is determined not to see Jules go gently into that good, comfortable retirement.  Mostly, it’s about Jules’ relationship with Ralston.

Deciding that the time has come to leave New York, he and Ralston go on a road trip to look for a house for Jules and Ritz.  When they find a possibility, Ralston has plans for it other than simply being his friends’ last home.

Interspersed with present events are Jules’s memories of their past, chaotic life; the travelling, the experiences and the sex, drugs and rock and roll of the 1960s and 70s.  For this reason I’d say it would be appreciated mostly by the over fifty-fives, those who have experienced the backpacking type of travelling or are familiar with, shall we say, a more erratic lifestyle; I think some of the references might go over the heads of anyone who ticks none of those boxes.  Maybe it’s a book about old hippies for old hippies.

Much of the narrative and dialogue is centred around the subject of the characters’ ageing processes, rubbish that is talked about ‘alternative’ philosophies, and also Jules’s observations about the writing world.  I found myself smiling a lot, and highlighting passages I agreed with or enjoyed.  Alas, I forgot to highlight many, but here are a few.

(about Jules’s client, who is writing novel based on her life)

…’Everyone’s life is a story.’

‘No it isn’t.  Things happen, but that doesn’t make it a story…A story is about something.  A particular struggle.  With a beginning and an end’.

‘You can learn something by studying its opposite.  Like, who the hell knows how to be happy?  So instead, think about what makes you unhappy, and avoid it.’

‘Doesn’t it ever occur to you that … when you don’t like someone, it’s because there’s something very wrong with them?’

‘Of course…and then I try to distinguish the subjective from the objective’.

‘What a bunch of pseudo-intellectual bullshit. Nothing’s objective…it’s just a cop-out’

‘The truth hit me.  The journey to transcend ego is an ego trip’

Yes, I enjoyed this book, and would definitely recommend.  My only criticisms are practical ones; at £6.13/$7.97 for the Kindle version it’s priced a bit high for the market, and the rather dull cover doesn’t do the book justice, or give any indication that this is a dryly amusing, entertaining and poignant story about artists, writers and other colourful people who have spent their lives living and thinking outside the box.  I’d have chosen a sunset streaked road with a back view of Jules and Ralston driving over the horizon, corny though that may be—or a few of them sitting on the dilapidated porch of the Monkey Temple.

Monkey Temple is a coming-of-old-age adventure about two longtime best friends and rivals who, determined to “not go gentle into that good night,” set off on a final road trip. Their efforts to face past failures and give meaning to their dwindling futures change their lives forever but not at all as they had envisioned. It’s a buddy story with strong female characters and plenty of dark humor.