A Thread Of Grace by Mary Doria Russell

A Thread Of Grace is historical fiction set during World War Two.

The main setting is north west Italy, primarily the two year period from 1943 to the end of the war. By 1943, pockets of Europe’s Jewish communities had escaped to South East France and were overseen by Italian armed forces, but then Italy switched sides. No longer safe, many of the Jews crossed the Alps hoping for safety in Italy; however, the Germans still dominated most of the country.

Featuring a complex mix of social, political and religious supporters, this story is about the strengths and determination of the people of this small province of Italy and how they helped hide, feed and protect thousands of Jewish refugees.

The book begins with a list of forty-six characters names, a daunting number, so I read with some trepidation thinking about how I would create memorable images of them all. The plot moves at a good pace and there is plenty of action and tension; I could imagine the settings and the situations that happened.

The author’s quantity of research shines through and her enthusiasm to tell the tale of the brave men and women is exemplary. However, with multiple characters all needing time for their stories, and weaving them together, the storytelling is, at times, hard to follow. Characters became names on paper rather than rounded three dimensional images in my head.

Renzo Leoni became a firm favourite; his bravery, confidence and control of situations while masking his own guilt gave him much needed layers of character. It also helped that he had three different identities, meaning that he frequently appeared in the narrative, which gave me an anchor to connect some of the many other characters to.

Overall, I mostly enjoyed the book.  What I will take away is the bravery of so many in protecting strangers and the lengths they went to in a horrific period of history.

8th September 1943, and Claudette Blum and her father are among thousands of Jewish refugees fleeing over the Alps towards Italy. For the Italians have broken with Hitler and sued for peace, and here the Blums hope to find safety at last. But overnight the Nazis seize control and the country becomes a battleground – for the occupying German forces, the advancing allies, partisans, Jews in hiding and ordinary Italians simply trying to survive.

Against this dramatic backdrop and through the lives of a multitude of beautifully drawn characters – a mercurial resistance leader, a priest, an Italian rabbi and his family, and a disillusioned Wehrmacht doctor – Mary Doria Russell tells the little-known story of those who sought refuge in Italy during the final phase of the Second World War, and of those who risked all to help them.

It is a powerful, profoundly moving novel. 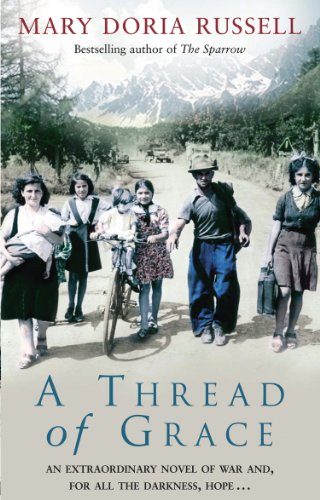