Olga has been reading Seagulls Over Westminster by Richard Wade 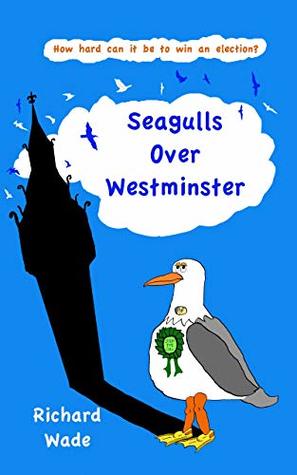 This is a novel set in the near future (2024-5) in the UK, focusing on politics, although I’d say that it is the equivalent of what a cozy mystery represents for the mystery genre. It has a light and humorous undercurrent; it does not go to extremes or deals in the most serious aspects of the topic; it is unlikely to offend most readers, and it does not touch on any of the burning and most controversial UK political issues (Brexit, for example). The author explains his reasons for his choice, and you can make of them what you wish.

There is a mix of characters, some more likeable than others, involved in the political race. In my opinion, Harry is the most likeable of them all, probably because he is honest and sincere, he gets reluctantly involved in politics, and as a retired man, fond of his family and with no evident major character flaws, and it is easy to root for him. Alistair has good and bad points, but I think most readers are bound to feel bad for him, and he does not have the necessary traits to ever become a political success. Bradley is the least likeable, although at some points during the book one might wonder if he is not as bad as he seems (and he is far from some of the totally ruthless individuals we are used to reading about in hard political thrillers). There are some secondary characters that are not on stage long enough for us to get to know them well but they give more variety to the novel and include some intriguing and even menacing elements. I don’t think an expertise on the UK political situation or institutions is necessary to read this book, although I suspect that the novel will be more enjoyable to people familiar and interested in UK politics.

This is a book of the time, and social media and media in general play a big part in the political process, seriously affecting the public’s perception, with revelations about the candidates being leaked as a way of trying to manipulate the results, secrets being revealed left, right, and centre (politically as well). But, as I said, this is a gentle book and even the revelations and the corruption that is unearthed is pretty mild compared to some recent scandals, and it is unlikely to truly shock or repel people (it is no hard-core political invective or exposé). Although some pretty dark goings-on are hinted at, it is never clear who was truly behind them and if any of the political candidates was truly involved, leaving this element of the story open to readers’ interpretations.

The book feels somewhat old-fashioned, even though it is set in the future, and although there are quite a number of female characters, most of them don’t play a central part in the story (and the one who does, and perhaps the most interesting of the characters, has doubtful motivations that stem from her relationships with a particular man), and either disappear early in the book or are part and parcel of a man’s campaign. Saying that, they come up quite well compared to most of the male protagonists, and they are often the ones pulling the strings from behind the curtains.

The story is entertaining, and having lived in Brighton and being familiar with the area, I particularly liked the local touch and the detailed background into local UK politics. I also liked the emphasis on the role of social media and media in general, Harry and his background in local radio (I love local radio and I also volunteer at a local radio station), and some of the most outrageous suggestions of future changes to politics (like the fact that rather than having names, the parties would become either the GOP or the OP, the Government Party or the Opposition Party, regardless of alliances or ideology, to ensure neutrality). It is also difficult not to read this book and think of possible candidates that would fit right into the roles, and worry that, no matter how humorous, what happens might be uncomfortably close to the truth.

The writing flows easily, creating a good sense of who the characters are, and in some cases making us feel touched and close to their experiences (I did feel pretty sorry for Alistair). The author has a light touch and is skilled at managing a fairly large cast of characters without causing confusion or overwhelming the reader.

An entertaining and gentle book that pokes fun at UK politics, unlikely to offend anybody with a sense of humour. An amusing and fun read for a day when we don’t want to take politics too seriously.

A political thriller for our time, but with a strand of gentle humour woven through it, making this intriguing story into an entertaining page turner.

Its 2024. Popular TV chat show host, and former MP, Bradley Deakin is the man wanted by the Opposition Party of the day to lead them back to power, breaking the chain of endless hung parliaments and uninspiring political leaders. They just need to get him elected first.

Meanwhile, in Brighton, retired bank manager Harvey Britten is enjoying life with the three things he loves most – his family, the city of his birth and his beloved football team, Brighton and Hove Albion, (known locally as The Seagulls). His support for the team has led to a regular spot on the local radio breakfast show, which has turned him into something of a minor celebrity.

It proves very difficult to find Bradley a suitable by-election until one unexpectedly occurs in Brighton. But Harvey strongly objects to a big shot candidate like Deakin being parachuted into his city and is reluctantly persuaded by his family and radio listeners to stand against him as a protest candidate. But only in the knowledge that he won’t actually win!

The race is otherwise between Bradley and the Government party candidate, Alistair Buckland, a local Councillor with a big secret. But as the campaign is gradually engulfed in scandal and conspiracy theories, it throws the whole contest wide open. Can a high class call girl with a plan for revenge change the outcome? Just how far did Bradley and his team go to cause the by-election in the first place? Will Harvey’s worst nightmare come true, in that he might actually win? And how bad does it have to get for a candidate before their loyal party supporters will refuse to vote for them?

As each candidate increasingly has to defend themselves against more and more serious accusations, both they and the people they love soon realise that there’s far more at stake for them all than just who will end up winning the election.